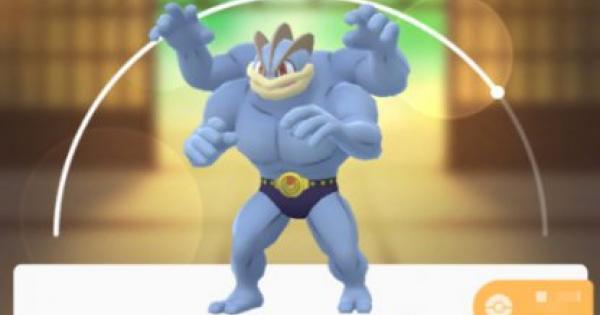 Find out the Best Pokemon in Pokemon Go! Use this tier and ranking list to find out which Pokemon are the best for raids, gym battles, & fights.

Ranking Is Not Based on PVP Viability

The criteria for Pokemon listed on this guide does not factor in their effectiveness in PVP battles. Check out the links below to find out the best Pokemon to use in PVP battles!

▼Check Out the S Rank Pokemon!

▼Check Out the A Rank Pokemon!

▼Check Out the B Rank Pokemon!

Check Out the Quick Ranking Criteria

User Poll: What is the Best Pokemon?

Is your favorite Pokemon not in the poll? Let us know and list it out down in the comments section!

Boasts One of the Best Attack Stats

Machamp boasts one of the Best attack values of all Pokemon. Not only does it have a strong attack, but the move combination of Counter and Dynamic Punch make it a near unstoppable force!

Machamp is often used to challenge gyms in order to counter Blisseys & Snorlax that usually guard the gyms. It is also a great Pokemon to use against Tyranitars and Lapras since it can ignore the high defense stats and just lay the beatdown on them!

Highest Attack Stat Among Other Pokemon

Mewtwo possesses the highest attack stat among all the Pokemon currently in Pokemon Go, making it the Best Pokemon based solely on stats! Mewtwo is a heavy hitter and can deal tons of damage in Raids and Gyms.

Can Use Several Charged Attacks

Mewtwo is able to take on a number of different enemies since it has a wide range of moves that can be used for its charged attack. Thanks to this, it can help it take on enemies of varying types!

As of January 2020, Rayquaza ranks 8th as the Pokemon with the Best raw attack power. It is a very strong Pokemon that can handle several enemy types thanks to its dragon typing, meaning it can deal 1x or more damage to several Pokemon!

Dialga is a legendary Pokemon, meaning that its maximum CP is very high. Its maximum CP also ranks as one of the highest of all the Pokemon (as of January 2020), making it a great Pokemon to use in battle!

Lucario is a fighting and steel type Pokemon, making it very useful for challenging gyms in the game. Since several Pokemon left to guard gyms are normal types, it would be easy for Lucario to deal damage to them thanks to its fighting moves.

Conkeldurr boasts one of the highest attack stats of all the Pokemon in the game. Not only does it have a strong attack stat, but it also can deal more damage with the Counter and Dynamic Punch moveset!

Can Be Used For Both Gyms & Raids

Conkeldurr is a highly versatile Pokemon since it is able to take out Pokemon guarding gyms such as Snorlax or Blissey. It can also bring down Tyranitars and Laprases with ease!

A Rank Pokemon For Gyms & Raids

Tyranitar has great stats for both attack and defense! Perfect for going against strong opponents in gyms. It's durability is also great since it boasts a high HP making it easier to go toe-to-toe with enemies in long battles!

Great Defense Against Many Types

Metagross is one of the most powerful Steel Types in Pokemon GO. It has high base stats and up to 10 Types are ineffective against it. It can easily deal with Fairy Pokemon in battles.

Kyogre has very high overall base states, making it a powerful Pokemon. If you match its move set to its Type, it can deal massive damage, making it a very strong contender in battle.

Kyogre is one of the Best water type Pokemon, making it a great option to use against rock, ground, and fire type Pokemon. Bring out a Kyogre when facing these types of Pokemon to turn the tides in your favor!

Groudon is a Pokemon that boasts one of the highest CPs in the game (as of January 2020). Therefore, it is a great Pokemon to use against enemies that are weak to ground-type moves.

Giratina (Origin Form) is a ghost type Pokemon which possesses the highest CP out of all ghost type Pokemon. Its attack and defense stats are well balanced, and with levels, can fight better when compared to a Gengar.

Giratina's Shadow Claw and Shadow Ball combo are easy to use, and one of the best ghost type attacks in the game. It can deal massive damage to enemies that are weak to ghost type moves!

Darkrai is a dark type Pokemon, making it effective against both psychic and ghost type Pokemon. This is useful for raids that feature legendary Pokemon such as Mewtwo (Psychic) or Giratina (Ghost).

Thanks to its Legendary status, Palkia boasts a high CP compared to other Pokemon. As of January 2020, it ranks 7th among all other Pokemon, making it a strong candidate for Gyms and Raids.

Aside from learning dragon type moves, Palkia is able to learn a wide variety of charge attacks allowing it to adapt to different combat situations. However, be careful as most of the moves Palkia can learn take awhile to recharge.

B Rank Pokemon For Gyms & Raids

Another legendary bird, Moltres has one of the highest base stat attack power in Pokemon GO. If you use moves that are the same as its Type, your attacks will be overwhelmingly powerful.

Need Experience To Use Moltres

Since the recommended moves of Moltres are Fire Spin and Overheat, it takes more knowledge to use this Pokemon in battle. Overheat can do big damage in a single shot but only has 1-gauge charge, so timing is essential.

Raikou has some of the highest stats among Electric Pokemon in the game. It is also very versatile & easy to use - with a high attack power that can easily lead to victory in gym battles & raids.

Blaziken is a Pokemon known for its offensive capabilities. Blaziken's move pool allows it to learn several high damage attacks, making it extremely useful when fighting against Pokemon weak to either fighting or fire moves!

Rhyperior has great overall stats and CP that puts it on par with the likes of Legendary Pokemon. Rhyperior's is ranked 18th out of all Pokemon (as of January 2020), making it a strong Pokemon to use!

Electivire possesses one of the best attack values out of all the electric type Pokemon. This makes it very lethal when facing Pokemon that are weak to electric such as flying and water!

One Of Highest Stats In Electric Types

Zapdos has one of the highest base stats in all of Electric Types. Being a legendary Pokemon, it has strong attack & defense compared to other Electric Pokemon.

Attack Can Change Depending On Normal Move

Zapdos's performance in a battle can change depending on its normal move. Charge Beam is hard to use due to charging time and Thunder Shock is a move that can only be received during the Zapdos event.

Gengar possesses a very high attack stat of 261. Because of this, it can be used to challenge gyms and raids that feature Pokemon that are weak to it.

Gengar is a ghost type Pokemon, making it very effective against other ghost and psychic Pokemon. Use this to your advantage when fighting against these enemies!

Gengar will have powerful Legacy Moves that allow it to deal super effective damage against psychic Pokemon. However, if you do not have the Lick and Shadow Ball move, it may be better to consider other options.

Dragonite is an all-time favorite in gym battles, raid battles, & legendary raid battles. It has well-balanced stats, making it very versatile. It can also deliver powerful attacks with its Type, which is very hard to counter.

Despite having lower attack stats than Rayquaza, Dragonite is more durable. This makes Dragonite a viable substitute when you plan on raiding gyms.

Garchomp is a dragon and ground type Pokemon, making it effective against other dragons and electric type Pokemon. Despite having less attack damage compared to higher tiered Pokemon, it is still able to perform against other strong Pokemon.

Salamence is a dragon type Pokemon, meaning that it is able to deal at least 1x damage or more to most if not all Pokemon. Use this Pokemon for a variety of different combat situations!

Outrage Is A Strong Legacy Technique

Salamence's move Outrage is very useful as it deals high damage to its targets. However, this move can only be learned from a limited event, making it a legacy move that cannot be learned anymore.

Roserade is a top class grass Pokemon, making it effective against water, rock and ground types. However, it also possesses a relatively low HP stat so consider the Pokemon you're facing before using this Pokemon!

Evaluation Criteria For The Best Pokemon

Here is the criteria used for evaluating the Pokemon in the game, and for choosing the currently Best Pokemon. Evaluation criteria may change at times.

Pokemon are evaluated using their ability to offensively take on gyms, where Pokemon with high defensive abilities are usually placed to defend. Pokemon that can easily take on gyms are ranked higher in the list.

Can Handle Different Types Of Pokemon

Pokemon that are effective against a number of different types of Pokemon will be ranked higher in the list. The Best Pokemon must be able to outlast lots of different Pokemon in battle!

Check Out All Pokemon Types Here!

Pokemon that are very helpful in bringing down bosses in Raid battles are ranked higher in the list since they possess strong moves that can make quick work of high level enemies!

Pokemon with very high combat power will be put in the list because of their sheer strength. However, it would be even better if they also possess a moveset that is strong and adaptable to different situations.

Check Out How To Raise Pokemon CP!

Rarity Not Included As Part Of Criteria