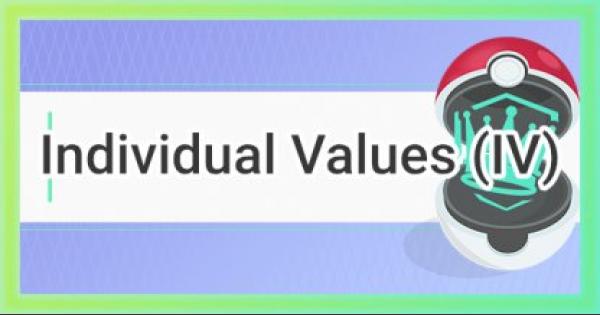 Check out this Pokemon GO on how to understand a Pokemon's Individual Value or IV. Learn which stats & numbers to prioritize, difference between CP & base stats, and more.

What Is Individual Value (IV)?

The Pokemon's Individual Value or IV is an invisible statistic that each Pokemon has. It directly affects the maximum number of HP and CP a Pokemon will have when it is captured.

IVs Are Separate From Pokemon's Base Stats

In Pokemon GO, there are three main statistics you need to check - CP, IV, and base stats. Each of these are different from each other and can quickly be understood as follows.

Difference Between IV, CP, & Base Stats

How To Check Individual Value

Pokemon Hatched From Eggs Can Have Higher IV

Pokemon that have hatched from eggs have a tendency to have higher IVs than those caught in the wild. Keep walking and hatch those eggs to get Pokemon with higher IVs!

Is It Necessary To Select Pokemon With High IV?

For advanced players, it's important to select Pokemon with high IV. Since players who battle in gyms will roughly be the same Trainer level, IV will be a deciding factor in the Pokemon's battling strength.

For beginners, it's best to focus on raising your Trainer Level to increase a Pokemon's max. CP limit. Focusing on high IV selection will be a lower priority compared to choosing Pokemon with high base stats & good moves.

No matter the Pokemon's size and height, it will not affect its Individual Value. There is no need to take a Pokemon's size in consideration when choosing which Pokemon to power up & retain.

Pokemon's Size Can Change After Evolving

After evolving a Pokemon, their size can change! So size doesn't matter when focusing on prioritizing a Pokemon's Individual Value or IV.

It's rare for a Pokemon's IV to change after it is evolved. Therefore, it's best to keep high IV Pokemon's in your roster and evolve them to increase their base stats & CP limit.