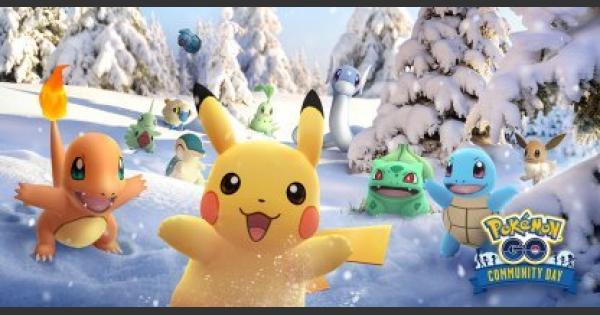 Learn all there is to know about Pokemon Go's Community Days! Includes a list of Community Day events (up to February 2020), shinies, time frames, featured Pokemon & more!

On February 26th, the official Pokemon Go Twitter account posted a new image related to Community Day. Very little information was provided, but judging from the color, it is being speculated that the event will have something to do with Shadow Pokemon! It also coincides with Pokemon Day, which features tons of other events as well.

The special move for Rhyhorn Community Day this February 2020 is Rock Wrecker. Evolve Rhydon to Rhyperior up to 1 hour after Community Day ends to get this move!

December 2018: All Past Featured Pokemon

During December, Pokemon featured in previous Community days had higher chances of spawning in the Community Day! You can also let them learn a special move by evolving caught featured Pokemon to their final evolutions!

November's Community Day features the fire type Pokemon Cyndaquil, and will let you help it learn "Blast Burn"! The Community Day also gives you a bonus of XP and double Catch & Hatch Stardust.

Beldum is the focus of October's Community Day. Players are given the chance to help it learn "Meteor Mash" while also enjoying a 4x Egg Hatch Speed, and 3 Hour Lures for the duration of Community Day.

September is the month of Chikorita as more of these Pokemon will appear. The Special Move is "Frenzy Plant", and players can enjoy double Catch XP, and 3 Hour Lures!

Eevee is the star of August's community day. Players will have the ability to help Eevee's caught on the day the move "Last Resort" while also getting 3x Catch Stardust, and 3 Hour Lures.

The water type Pokemon Squirtle will more likely appear on July's Community Day, and can learn the Special Move "Hydro Cannon". Other Bonuses such as 1/4 Egg Hatching Distance & 3 Hour Lures are present.

Larvitar is June's featured Pokemon and can learn the move "Smack Down" when it is evolved into Tyranitar on the same day. Players can also enjoy the 3x Catch XP and 3 Hour Lure bonuses.

Charmander appears more frequently during May's community day. It can learn the move "Blast Burn" when evolved to Charizard and players get bonuses of 3x Catch Stardust, and 3 Hour Lures during the event.

Mareep is featured on April's Community Day, and can learn the move "Dragon Pulse" when it is evolved to Ampharos on the same day! There is also 1/4 Egg Hatching Distance bonus!

Bulbasaur spawns more often on March's Community Day and can learn the move "Frenzy Plant" when evolved to Venusaur. There is also a 3x XP Bonus during this Community Day!

February's featured Pokemon is Dratini, and evolving it to Dragonite on the same day will allow it to learn the move Draco Meteor! Players can also enjoy the 3x Catch Stardust Bonus during the event!

What Happens During Community Days?

During Community Days, a featured Pokemon will have a higher spawn rate during the stated time of day! It's a good time to catch that Pokemon and hoard candies.

Community Day featured Pokemon unlock a special move when they're evolved to their final evolution during the day! You have until an hour after the event to evolve them and get the special move.

What is a Community Day?

Community Days are special events in Pokemon Go where certain Pokemon have a higher chance of spawning in the world for a few hours! It is only held once every month so watch out for them!

Announced in Advance in the Pokemon Go App

You can find announcements of Community Days in the Pokemon Go app's news section. The announcements will include the feature Pokemon, the schedule, and other details on the event!