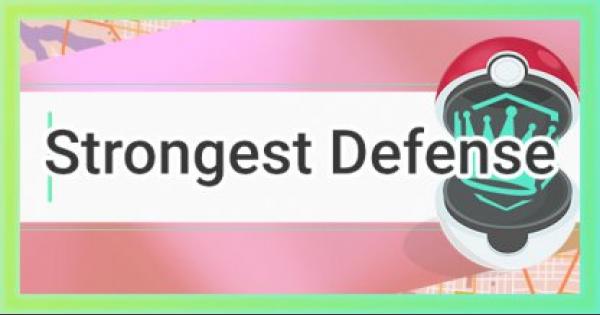 Learn which Pokemon are the best at defending gyms! Use this tier list & ranking to find out which Pokemon will help defend your gyms well!

Rankings are based on statistics before the 2018 balance changes. This article will be updated as soon as more information regarding defense stats is confirmed.

HP and CP are two very big factors when it comes to evaluating the effectiveness of a Pokemon's Gym defense. Their HP must be high to increase their survivability while having high CP ensures they can hit back hard!

Having high defense is only one part of the story. Having good moves that deal lots of damage to attackers will make your Pokemon defend Gyms for longer since it takes out the competition easily!

Few Weaknesses Against Other Types

A Pokemon with few weaknesses will be very valuable as a strong Defense Pokemon. It will be hard for other Trainers to beat your Pokemon if their attacks are not that effective!

Blissey has very strong defense against enemies due to its very high HP. It is a great defender unless an effective Pokemon is used against it.

Blissey also has the ability to learn moves which are effective against Pokemon that are strong against it. This will make Blissey an even harder target to bring down!

Like Blissey, Chansey has high defense, and can win a gym battle by using up the time. However, Chansey cannot learn moves which are strong against effective Pokemon which is why it is not ranked higher.

Can Force Attackers To Use Different Pokemon

Gardevoir is a strong defender that can use Psychic type moves. Due to its few weak points, it may force attacking Players to change Pokemon types, making it harder for them to beat the gym!

Snorlax is a Pokemon that has veru high HP and Defense giving you a chance to win by making attackers run out of time. However, since it is a normal type, it may be easily beaten by fighting and psychic types.

Slaking does not have great attack prowess, but more than makes up for it by having really good defense stats. It also has a great charged attack in Play Rough that will help it deal good damage to attackers.

Hariyama has good defense stats helping it win in defense by using up time. What separates Hariyama from other Pokemon is that its moves are very effective against Tyranitar, a very powerful attacking Pokemon.

Lapras is an effective defender against a strong attacker in Machamp. Lapras is also a great defender when going up against Dragon-type Pokemon which other players often use to attack.

Since Muk is a Poison-Type Pokemon, it can be very effective against Fighting-Type attackers like Machamp. However be careful as Muk does not do well against Psychic-Type attackers!

Clefable is an effective defender against Dragons because it's a Fairy-Type Pokemon. Clefable's order in the gym can also disrupt a battle, and make an attacker change Pokemon.

Can Force Players To Change Pokemon

Espeon is a Psychic-Type Pokemon which is effective against several types of Pokemon. This may force players to change Pokemon mid-battle. Other than its good defense, it also has a high attack stat which can make quick work of attackers.