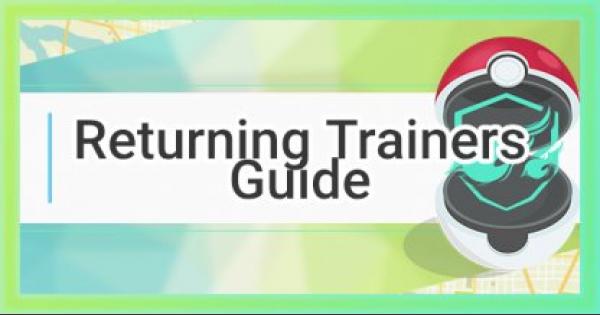 Welcome back to Pokemon GO! Here is a play guide for returning trainers including recommended play method, new elements in the game, battle tips, & more!

Pokemon GO now has more than 400 Pokemon to be collected in-game! The roster now spans through 4 generations of Pokemon!

Find A Spot To Play Near You

It's best to find a convenient spot near you or a place you pass by often when playing Pokemon GO. Even if you pass by the same place, weather conditions change and Pokemon that spawn routinely cycle over time.

There are a few Pokemon that you should catch the moment you encounter them. They can be rare spawns or Pokemon that evolve into stronger forms that are very powerful in battle.

Pokemon You Must Catch When Encountered

Pokemon With Special Means Of Obtaining

There are certain Pokemon that you won't be able to encounter & catch in the wild. Some have a special means of obtaining them such as hatching from eggs, using items, etc.

How To Obtain Specific Pokemon

Pokemon Obtainable Only Via Evolution

There are some Pokemon like Gardevoir that can only be obtained via evolution. These are Pokemon that you can't encounter in the wild!

Region-specific Pokemon are those that can only be found in certain destinations. For example, Kangaskhan can only be caught in Australia, Mr. Mime in Europe, and Farfetch'd in Japan.

Check Out How To Find & Catch Ditto!

You can catch Ditto in the wild but it's a tricky Pokemon to capture! You'll only find out if you caught a Ditto when it transforms back to its original form. Keep catching the Pokemon Ditto transforms into, to up your chances!

Shiny Pokemon are still available in Pokemon GO. Although there are now more Shiny Pokemon in the game that before, there are still many from the Pokedex that don't appear in the wild, so keep playing!

Check Out What Are Shiny Pokemon!

Most trainers leave Normal Type Pokemon to guard their gyms such as Chansey, Blissey, Snorlax, or Slaking. These Pokemon are weak against Fighting Type and Machamp has one of the best stats as a Fighting Pokemon.

Hunt For Machop During Cloudy Weather

Machop appears more often when the weather is cloudy. Keep an eye out on the weather to spot this Pokemon in the wild.

Check Out The Weather System Here!

Machamp Can Appear As Raid Boss

Machamp can sometimes appear as the raid boss in gym raid battles. If you don't have a Machamp in your inventory yet, be sure to look out for these raids & participate in them.

Team Up With Several People To Win The Raid

When attempting to defeat a Level 4 raid, it's best to play with 4-5 people. This makes sure that you deal enough damage to defeat the raid boss within the time limit.

It's recommended to fill a raid battle lobby with more than 7 trainers in order to defeat the legendary raid boss. Being level 5, these Pokemon inflict bigger damage & can one-shot your Pokemon.

Know The Battle Rules By Heart

It's important to first know how to do PVP battles in Pokemon GO. A single mistake can lead to your defeat, so learn the rules & gameplay by heart!

Remember that each Pokemon has a Type and each Type has strengths & weaknesses. Memorize them and you'll be able to counter your opponent's Pokemon in battle.

Know Which Pokemon Trainers Use Often

After learning more about the rules & Pokemon Types, next you need to learn which Pokemon appear more frequently in PVP battles. Knowing these 3 things will help you build a strong roster that can be unbeatable in every Trainer Battle League!

Check Out Recommended Pokemon For PVP!

Things To Know To Win

Learn Which Pokemon Are The Strongest

Knowing which Pokemon have the highest max. CP, highest base stats, and strongest moves will help you determine which to catch & raise.

Go To Where Pokemon Spawn Frequently

Going to places where Pokemon spawn more frequently will help you catch more Pokemon and in turn, give you more Candy. These can be used to evolve & power up your Pokemon, making them stronger for battle.

Use Buddy Pokemon & Rare Candy To Get More Candy

Partnering up with a Pokemon and walking a certain distance will give you Candy as time goes by. You can also use Rare Candy & change it to a Pokemon-specific Candy. These are all effective ways to get more Candy to strengthen your desired Pokemon.

Large amounts of Stardust will eventually be needed to power up already strong Pokemon. Use your Stardust sparingly and only spend them on Pokemon you want to make more powerful.

It's best to raise your trainer level to the highest you can. This raises the maximum CP limit of your Pokemon, making them stronger in battle when you power them up.

Check Out How To Level Up Fast!

A bunch of new elements have been added to Pokemon GO since its release in 2016. Check out the table below for more information.

PVP battles are now available in Pokemon GO. Split into 3 leagues, with different Pokemon CP limits, trainers can fight against fellow trainers to see which of their Pokemon is the strongest.

With the release of the Trainer Battles, certain Pokemon can learn "New Attack" and have a 2nd gauge for charge moves. To unlock this, you need Stardust & Candy.

Matching your Pokemon's Types with its moves will now be more important. Damage will be boosted if the Type matches and effectivity will be reduced if Type isn't matched.

Adventure Sync allows your mobile to track your steps, distance walked, and location even if the Pokemon GO app is idle. This way, it is faster to hatch eggs & get Pokemon Candy.

Check Out How To Turn On Adventure Sync!

The 4th generation of Pokemon from the Sinnoh region has appeared in Pokemon GO! Now you can find Plupip, Turtwig, & Chimchar in the wild along with their other Sinnoh Pokemon counterparts!

Friends in Pokemon GO can now trade Pokemon & give gifts to each other. Fighting in gyms & raid battles will also increase your Friendship Levels.

Lucky Pokemon Can Be Received By Trading

When trading with Friends, there's a chance that the Pokemon you'll receive will be Lucky Pokemon. These Pokemon need less Stardust to power up and have a special yellow-golden background.

Players can now assist Prof. Willow in research tasks to get bonus items & encounters with Pokemon.

EX Raid Battles are now in Pokemon GO. These are special invite-only raids that feature strong legendary or mythical Pokemon. The first EX raid boss was Mewtwo and it has now made way for Deoxys.

Every month, there is a Pokemon GO event day where a featured Pokemon will appear more often in the wild. These "Community Days" are a great way to meet other Pokemon Trainers!

Check Out What Are Community Days!

Starting from the Water Type festival event in March 23, 2017, Shiny Pokemon have made their appearance in Pokemon GO. There are still few Shiny Pokemon in-game - they are rare encounters in the wild & are hard to find.

Players can start fighting boss Pokemon in gyms in "raid battles". These are multiplayer battles where trainers must work together to defeat a singular boss Pokemon.

High level raids usually have powerful Pokemon as the raid bosses. Defeating these raid bosses give you the chance to capture these Pokemon & include them in your battle roster.

You normally get massive amounts of XP, Stardust, and rare items such as Golden Razz Berries, TMs, etc. when you defeat raid bosses. Keep raiding to stock up on these valuable items.

You Get One Pass Per Day So Challenge Rare Pokemon

Players only get one free raid pass per day so it's best to save this pass for high level raids. Aim for legendary or high tier Pokemon so as not to waste your raid pass.

Pokemon spawns are now affected by the weather in your current location! Weather also boosts certain Pokemon's moves if their Type matches correctly.

A lot of elements have been added to gym battles since the game's release. These include gym badges, new fighting system, and more. Spinning Gyms will now also give you items.

You Can Now Just Tap Your Charge Attack

Previously, you need to press and hold your gauge technique for it to activate. Now, players simply have to tap onto the button for the move to activate.

Gyms now track your interaction via gym badges. Increasing your gym badge rank will give you the advantage of getting more items when spinning the gym disc, more XP points, and possible invites to EX raids.

Receive Pokecoins Depending On Hours Gym Has Been Defended

Check Out How To Efficiently Earn Pokecoins!

How To Use New Available Items

You can check the below information on how to use the new items available in Pokemon GO.

Super Incubators are much more effective than normal Incubators. They lessen the distance needed to hatch an egg. It's best to use with 5KM, 7KM, & 10KM eggs. Don't waste it on 2KM eggs.

A Star Piece increases the amount of Stardust you receive by 50% for the next 30 minutes. Use this in conjunction when hatching eggs to get massive amounts of Stardust.

Pinap Berries increase the amount of Candy your receive when you capture a Pokemon. Feed it before capturing to ensure double amount of Candies. It's best to use when you're aiming to evolve a certain Pokemon.

This berry calms a Pokemon down when you are trying to capture it. These aren't that important and can be discarded to make way for more important items in your inventory.

This berry greatly increases your capture rate, when fed to wild Pokemon. Giving it to a Pokemon that is defending a gym will also fill up its motivation bar up to full. It's best to be used to catch legendary Pokemon & Pokemon in gyms.

There are several evolution items now available in-game. You can randomly get them by chance when spinning Poke Stops.

It's now easier to search for Pokemon in your inventory with the name search function. You can easily find Pokemon depending on their name, Pokedex number, Type, and etc.