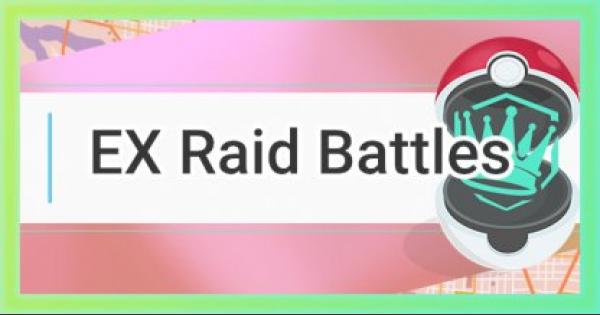 Check out this Pokemon GO guide on EX Raid Battles! Find more information on how to get an EX Raid Pass, raid bosses, tips and tricks to defeating an EX raid, and more!

The defensive form of Deoxys is coming to EX Raids! Starting March 25, 2019, Trainers can challenge and capture the mythical DNA Pokemon!

How To Get EX Raid Pass

You can spot an EX raid gym by checking the gym info. You'll notice a small icon at the top right corner stating if that gym is an EX raid gym.

Defeating EX raid gyms will not guarantee that you will receive an EX raid pass. You get them randomly, by chance, and some methods can be done to increase your chances.

Fighting & visiting gyms, leaving Pokemon to defend gyms, & feeding treats to Pokemon defending your team's gyms will raise your badge level. Keep doing these things to get gold badges which will give you a higher chance of getting an EX raid pass.

Just keep visiting and battling in gyms, rinsing & repeating this process to up your chances of getting an EX raid pass. It's still by random chance so keep at it until you get one!

What Is An EX Raid?

An EX Raid is a special raid that feature special Pokemon! Players need to be invited to this battle via the EX raid pass.

Best Or Ultra Friends Can Be Invited

Players who receive an EX raid pass can invite one of their friends to participate in the raid with them. Players need to be "Best" or "Ultra" friends in order to receive the EX raid invite.

EX raids have a specific date and time indicated in the EX raid passes. Players need to be at the specified gym at a certain day and time to participate in the battle. The EX raid pass won't work otherwise.

The first EX raid boss in Pokemon GO, Mewtwo is the legendary Psychic Pokemon that was created from the DNA of mythical Pokemon, Mew. It's weak against Bug, Ghost, & Dark Type moves.

Another Psychic Type, Deoxy's Normal Form has replaced Mewtwo as the boss in EX raids. It is also weak against Bug, Ghost, and Dark Type moves so bring Pokmeon that have these types of attacks.