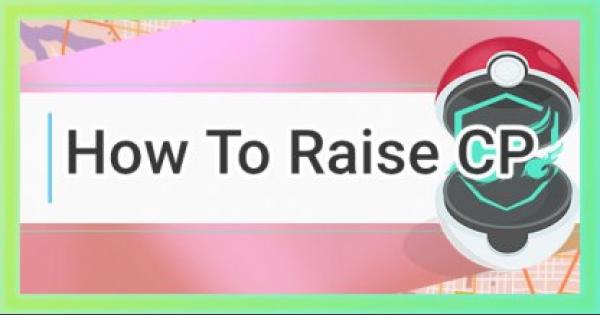 Read this Pokemon GO guide on how to raise a Pokemon's CP - including information on how to power up Pokemon using Stardust, candies, and more!

Check Out The Starter Tips Here

How To Raise Combat Power (CP)

Can't Power Up Pokemon If Trainer Level Is Too Low

If you've reached the upper limit of a Pokemon's CP, you'll only be able to power up this Pokemon if you raise your trainer level.

CP Limit Is Removed When Trainer Level Is 35

Once you reach trainer level 35, the CP limit will be removed and Pokemon can be powered up to your heart's content, as long as you have the Stardust and Candy.

You'll earn XP by playing Pokemon GO - catching Pokemon, defeating gyms, defeating raids, and battling other trainers. This is how you can raise your trainer's level.

Check Out How To Level Up Fast Here

You can earn Stardust and Pokemon-specific Candy by simply catching Pokemon whose CP you want to raise. This is one of the easiest and simplest ways.

Check Out How To Catch Pokemon Easily!

Choose Pokemon You Want To Power Up

Once you have enough Stardust and Candy, you can finally raise the CP of your desired Pokemon. Simply press the "Power Up" button when checking the status of your Pokemon in-game.

After you've powered up your Pokemon 4 times, the Stardust needed will increase. The needed Stardust will increase after every 4th power up.

Once you've powered up your Pokemon enough to need 5000 Stardust per power up, the CP number increase will be reduced.

The HP bonus will also be reduced after every 4th power up of a Pokemon so it's best to use your remaining Stardust & Candy on other Pokemon.

What Is Combat Power?

A Pokemon's Combat Power or CP indicates its statistics and overall level, determining how well it will do in battle. The higher the CP level, the higher the capacity of attack strength of a Pokemon.

CP Is Randomly Generated Per Pokemon

CP is randomly given per Pokemon. You can catch two same Pokemon and they can have different Combat Power numbers, therefore have different attack power capacities.

A Pokemon's secondary or final evolution will always have a higher CP than its base form. Evolving a Pokemon also increases this limit, allowing you to power up their CP & make them stronger.