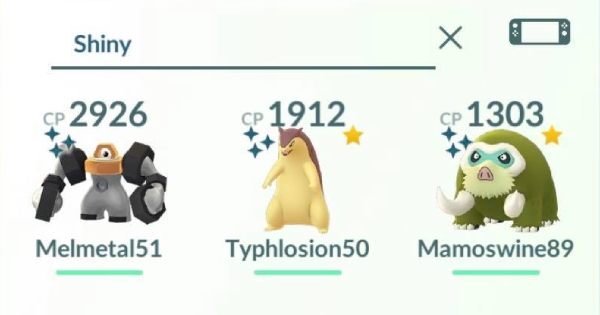 Check this Pokemon GO guide on catching shiny Pokemon in 2020! Including latest event shinies, spawn rate and chance, and more information for your shiny hunting!

The shiny version of Rhyhorn will be introduced to Pokemon GO for February 2020's Community Day. Evolving a Rhydon into a Rhyperior will give it the exclusive attack "Rock Wrecker".

There are currently 366 Pokemon with shiny variants in Pokemon GO. This excludes Pokemon with special costumes such as hats, eyewear, outfits, etc.

How To Get Shiny Pokemon

No Guaranteed Way Of Encountering Shinies

Shiny Pokemon are implemented mostly during events in Pokemon GO. It's highly likely to encounter a shiny during Community Day, when specific Pokemon spawns are up.
>>2020 Events List
>>What Is Community Day?

Shiny Pokemon In The Wild

There is a slim chance of getting a shiny Pokemon by simply going out and encountering Pokemon in the wild. Just keep going into the capture phase to find out if the Pokemon you've encountered is a shiny!

Shiny Pokemon Encounters In The Wild

Shiny Pokemon will evolve into a shiny version of their next form! Excluding Raichu, there have not been any sightings of Shiny evolved Pokemon out in the wild.

Shiny Pokemon can also be found when hatching an egg! Some of these Shiny Pokemon are the Baby forms of other Pokemon, such as Pichu, Azurill, and Elekid.

Check Out All Egg Hatch Pokemon!

You also have a chance of encountering shiny Pokemon bosses in raids. Joining many raids can increase your chance of capturing a shiny legendary Pokemon.

Some Field Research in Pokemon GO can give you Pokemon encounters, and very rarely, you may encounter a Shiny Pokemon!

NOTE: The list below only contains confirmed Field Research Tasks and rewards. Please keep in mind that some of these tasks may not be active anymore.

* Pokemon that may appear as shiny variants.

According to surveys, the likelihood of Shiny Pokemon spawning in the wild is 1/500.

Are Encounter Chances Different Per Pokemon?

There are different ways to capture or encounter Shiny Pokemon within the game - hatching eggs, capturing them in raids, etc. However, it's been surveyed that chances don't change depending on the Pokemon.

If encountering Shiny Pokemon in the wild of 1/500 that gives trainers 63% chance for every 500 Pokemon encountered.

Do Shiny Pokemon Run Away?

Shiny Pokemon Can Run Away

Can I Trade Shiny Pokemon?

Can Special Trade Once A Day

Shiny Pokemon can be traded with a friend once a day and is considered a Special Trade. Make sure to think about this carefully as it often costs tons of Stardust to trade a Shiny Pokemon.

Check Out How To Trade Pokemon Here!

Can You Tell If It's Shiny In The Wild?

A Shiny Pokemon will not be seen in the world map of Pokemon Go. You need to encounter the Pokemon and go into the capture screen to see if it's a Shiny.

Stays Shiny Even If You Run Away

If you leave the capture screen, as long as the Pokemon has still spawned in the world map, it will remain Shiny. If it disappears from the map and another Pokemon takes its place, it will not be the same Shiny Pokemon.

There hasn't been any confirmation if Shiny Pokemon spawn as their evolved forms. Usually you get base Pokemon as Shiny when you encounter them in the wild.

Can Shiny Pokemon Spawn From Lures?

Shiny Pokemon Can Spawn From Lures

Shiny Pokemon can be spawned when a lure is active in a PokeStop. Lures are often used during Community Days or events to increase chances of Shiny Pokemon spawning.

Check Out How To Use A Lure Module!

Can I Use Poke GO / Ball Plus?

Shiny Pokemon Can Be Captured

Are There Changes In The Pokedex?

Can You Transfer To Prof. Willow?

Can't Be Transferred In Bulk

Shiny Pokemon can't be transferred in bulk to Professor Willow. You need to select them one by one so as not to make any mistakes when transferring Pokemon.

What Are Marks Beside Shiny Pokemon?

Marks Indicate If Pokemon Is Shiny

The three sparkle marks on the upper left corner of the Pokemon icon indicate if that Pokemon is Shiny or not. This makes it easy to check in your Pokemon storage.

In this year's Valentine's Celebration for 2020, the Shiny versions of Happiny and Lickilicky were introduced in Pokemon GO. A Shiny Lickilicky can be encountered during a raid event on February 15.

Shiny Riolu and shiny Hippopotas were implemented in the Sinnoh Appreciation Event!

For a limited time, during Lunar New Year, the Shiny versions of Minccino and Cinccino have been implemented in Pokemon GO.

During the Egg event in January, the Shiny versions of Wurmple, Cascoon, Silcoon, Beautifly, and Dustox were implemented in the game.

Making its way back to the raids, Heatran's Shiny version can be encountered when you defeat it in 5-star raid battles!

Pidgey is missing in the shinies list - I have one...