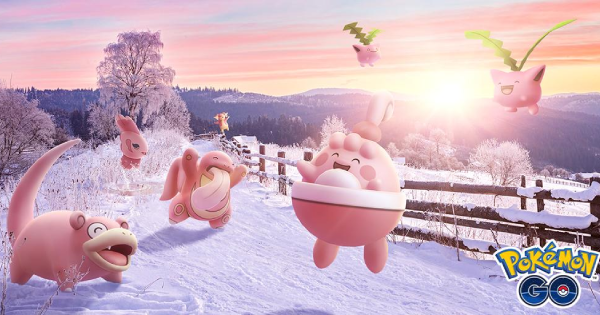 It's the month of love and Pokemon GO is celebrating by increasing pink Pokemon spawns, starting Valentine's Day! Learn more about the Valentine event, duration, special Pokemon like Spinda & Happiny, and more.

Check Out the Events Schedule Here!

Starting Valentine's Day, the Pokemon GO 2020 Valentine's event will be happening for 4 lovely days! New pink Pokemon such as Audino & Alomomola will make their debut & will easily be captured during this event.

Making their debut in Pokemon GO, Audino and Alomomola will spawn in the wild to be captured and hatch from 7 km eggs!

During the Valentine's 2020 event, the shiny versions of Happiny, Chansey, and Blissey will be implemented in the game! If you hatch a shiny Happiny, you can evolve them to get a shiny Chansey then Blissey!

Pink Pokemon will be found in the wild more often, can be hatched in eggs, or be encountered in Pokemon raids.

You will also be able to hatch more pink Pokemon from 7 km eggs! Open gifts from friends, walk, and catch them to get these Pokemon.

During the Valentine's event, you'll be able to receive more candy every time you catch a Pokemon. If you use a Pinap Berry, you can earn up to 12 Pokemon candy in a single catch!

Lure Modules Will Last For 6 Hours

For the duration of the event, lure modules will last for up to 6 hours when placed on a Poke Stop. Be sure to take advantage of any active lures near you!

There are 4 new Valentine's event tasks that trainers can complete to get Pokemon encounters. These tasks can be received by spinning PokeStops you come across.

The giant tongue Pokemon, Lickitung, will appear more often as raid boss battles. If caught, this Pokemon will have the move "Body Slam".

If you evolve your Lickitung that you caught in the raid into Lickilicky, it will inherit the move "Body Slam" as well.

Shiny Versions Can Be Caught

Get Up To 5 Raid Passes

During the Lickitung raid event, trainers will be able to get 5 Raid Passes when you spin PokeStops. Make sure to spin the PokeStop disc to get them as they won't appear after the raid day.

Can't Have 2 Raid Passes On Hand

Unlike Premium Raid Passes, you cannot have more than 1 Raid Pass in your bag. Participate in a raid then spin a PokeStop to get another Raid Pass to complete the total of getting 5 during the event day.

New styles are being sold to celebrate Valentine's Day 2020! 4 new styles have been added to the Pokemon GO shop.