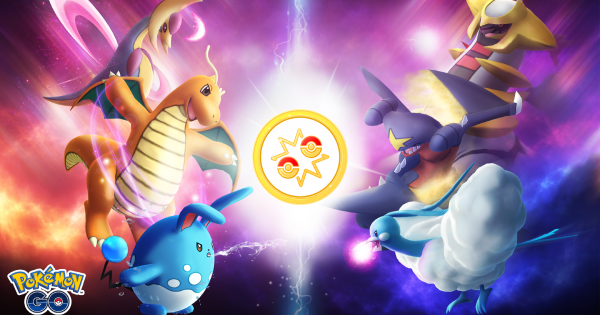 Read this Pokemon GO guide on the best party for PvP Trainer Battles for Master, Ultra, and Great league, best builds and moves, tips, and much more!

No Legendary Or Region Limited Pokemon

Use Dialga As Main Pokemon In Party

Dialga has high attack power and defense, making it a top contender in the Master League. It also works well with Togekiss & Giratina. If you're faced with an opponent's Togekiss, you can fight it with Dialga or your own Togekiss.

Dialga is a very common Pokemon to use in the Ultra League so make sure to boost your Dialga's CP to get the competitive advantage. There's no CP limit in Master League so the higher your CP, the better.

A Party With Dialga At The Lead

This party makes use of Dialga's very few weaknesses and throws it out first into battle. Dialga is weak to Fighting and Ground types, which means you'll have to watch out for Melmetal's Superpower and Dragonite's Dynamic Punch, as well as Swampert's Earthquake.

It's possible that your opponent will switch out upon seeing your Dialga, so it's important to be able to set up an advantageous situation for yourself in this case. If they switch into Melmetal, bring out your Swampert. If you see a Dragonite, swap into Giratina.

There are situations where you and your opponent both send out a Dialga first. In such cases, setting your Dialga as your Buddy is a good way to get the advantage in the mirror matchup.

A Party Build Around Melmetal

This is a party built to support a Melmetal lead. Although this team seems to have many weaknesses, the team synergy is such that each member makes up for the others' weaknesses.

In Master League, Origin Forme Giratina is seen more often due to its higher attack. However, if you do this you'll be left with only Melmetal to deal with Togekiss. Altered Forme Giratina can learn Ancient Power, which gives it the advantage over Togekiss.

This is a party that puts the high HP/Atk Origin Forme Giratina at the head. Lead with Ominous Wind and hope for the stat up proc, as that will often cement your victory.

The remaining 2 spots in your party should be able to deal with Giratina's main threats, Tyranitar and Togekiss. Be ready to react to your opponent's switches quickly.

Watch Out For Dialga

This particular party is somewhat vulnerable to Dialga, so be careful in how you deal with. Ensure that your Metagross's Earthquake is not blocked by a shield!

This party leads with a strong Dragon Breath/Dragon Claw using Dragonite. In terms of a charge move, you have the option between Outrage and Hurricane.

Works Well With Melmetal and Togekiss

Dragonite works well with these two Pokemon, as they supplement each others' weaknesses. Even if Dragonite is taken down, you can often stick it out long enough to win. Make sure to utilize your team's double resistances effectively when switching out.

Party With Dragonite At The Lead

This party has a strong lead in the form of Dragonite, with Dragon Breath and Dragon Claw both being excellent moves that allow it to fill up its gauge fast. Outrage also deals massive damage, so make sure to consider how many shields your opponent has left before using it!

Switch Out Into Snorlax

Snorlax's few weaknesses make it a great candidate to switch out even if you don't know what other Pokemon your opponent is bringing. With Earthquake as its charge move, it can also hold its own against Dialga.

Garchomp's typing makes it quite powerful, being able to use STAB Outrage and Earthquake. Garchomp works extremely well against Melmetal and Giratina, but it needs to be careful against Togekiss and Articuno.

Metagross resists all 3 of Garchomp's weaknesses (Ice, Dragon, and Fairy), making it a great choice to swap out into when in a disadvantageous position. Just watch out that, as always, if you swap out first, your opponent can react to you and send out something Metagross is weak to.

Togekiss is a powerful Fairy/Flying type with access to the great move Charm. It doesn't deal well with Fire, Poison, and Steel types, but with those exceptions, it can deal excellent damage to most Pokemon. It works well at forcing swaps from your opponent, giving you the advantage in the fight.

Pairs Well With Garchomp and Swampert

To help deal with Melmetal, which is quite dangerous for Togekiss, you can bring out Ground moves from the likes of Garchomp and Swampert!

Tyranitar may have a large amount of weaknesses, but its Dark typing makes it quite strong against Ghost and Psychic types. If you anticipate a super-effective move to come your way, swap out into your other 2 Pokemon.

Metagross does well at covering many of Tyranitar's weaknesses, while Swampert can deal with any ground types that might threaten the other two. This works particularly well since Grass types are relatively rare in Master League.

Use Giratina As Main Pokemon

Use Swampert Against Alolan Muk

Alolan Muk can be used to fight against Giratina. When this happens, swap out Giratina for Swampert to take down the Alolan Muk.

Party With Togekiss As Main Pokemon

Togekiss as the main Pokemon in a party can be strong against an opponent's Giratina.

Swampert Is Effective Against Alolan Muk

To counter Alolan Muk, bring out your Swampert. This Pokemon is also highly versatile, allowing you to deal high damage to any Type of Pokemon with Hydro Cannon.

Armored Mewtwo's moves can be hard to read, providing you with a battle advantage. It is also very durable and can withstand strong Pokemon attacks.

Party With Steelix As Main Pokemon

In this party, Steelix will be your main Pokemon. This Pokemon can tough it out against Giratina, a widely used Pokemon in the Ultra League.

Use Charizard Against Registeel

Venusaur Is Strong Against Water Types

In Ultra League, you'll come across many Water Types - Swampert, Poliwrath, and Suicune, to name a few. Use Venusaur to take them down fast but be careful as Venusaur also has a lot of weaknesses.

Use Gyarados As Main Pokemon

Gyarados is an effective main Pokemon against Giratina in the Ultra League. Hydro Pump is very powerful and its gauge can be charged fast.

Registeel can be countered effectively by Typhlosion's Fire moves. Shadow Claw is used mainly to build the gauge of Solar Beam fast in this party.

Meganium is a powerful Pokemon that can learn different Types of attacks to deal with different Pokemon. If Typhlosion falls against Registeel, it can still fight using Earthquake.

The main Pokemon in this party is Altaria, which has strong moves and great defense. With Registeel in your party, it will compensate well for Altaria's weakness to Ice, Rock, Dragon, and Fairy.

Strong Swampert Can Do Great Damage

If you have a powerful Swampert with the Legacy move, Hydro Cannon, be sure to include it in your party. It can do great damage even to any Pokemon and only has Grass-types as its weakness, which can be covered by Registeel and Altaria anyway!

Watch Out For Azumarill

If Hydro Pump is included in an enemy trainer's Azumarill's move set, it'll be difficult to take it down. Make sure to be cautious when facing an Azumarill in battle.

Deoxys is a strong Pokemon that can be used as your central Pokemon in this party. It has high defense and can use several Types in its attacks, allowing to cover a range of enemy Pokemon.

Poliwrath Is Strong Against Registeel

Poliwrath can be used to fight effectively against any opponent's Registeel. It can also charge its gauge fast with Mud Shot, allowing you to use Ice Punch fast.

This Pokemon party does not have any resistance to Electric Types so you must use Deoxys against those. Alternatives to Poliwrath can be Whiscash, Swampert, or Toxicroak.

Azumarill is a good Pokemon with only a few weaknesses, making it good as a center of this PVP party. It's weaknesses in Type can be covered by Skarmory and Whiscash.

You have 2 Pokemon that are weak to both Grass & Electric Types. It's best to try and predict your enemy's movement and switch your Pokemon when it brings out a Grass or Electric Type.

Use Swampert As Main Pokemon

In this party, Swampert is your main Pokemon. It is durable and only has a few weaknesses.

Skarmory makes up for Swamperts weakness to Electricity, making it a great Pokemon to include in this party.

Use Alolan Muk Against Azumarill

If you're faced with an opponent's Azumarill, Alolan Muk is a great Pokemon to use against it.

Trading Is Necessary For Alolan Muk

If you evolve an Alolan Muk hatched from an egg, your CP will exceed 1500. In order to use Alolan Muk, you'll have to lower its IVs by trading, so be careful.

Have Pokemon With Separate Weaknesses

Make sure to bring Pokemon that don't have a shared weakness in types. If your opponent is able to identify your Pokemon's weakness, they will be able to wipe your party out fast.

How To Compensate For Weakness

Don't Bring Pokemon With Many Weaknesses

It's best to bench Pokemon that have many weaknesses in their Type. This will be disadvantageous to you overall, making it easy for you to lose your matches.

Pokemon With Many Weaknesses

To create a PvP party, you must first choose the Pokemon that will be your main attacker & center of your party. For example, in this party we will choose Altaria.

After choosing your main Pokemon, you'll need to pick supporting Pokemon that will be good against Pokemon your main one is weak against. In this case, Alolan Muk is strong against Fairy Types, which Altaria is weak to.

Compensate For Each Pokemon's Weakness

Choose Pokemon that complement each other's strengths and weaknesses, to make sure all points are covered. It's best to supplement your main Pokemon's weakness with another Pokemon that is strong against that specific type.

Your 3rd Pokemon should not have the same weaknesses as your main and 2nd Pokemon. In this case, the Whiscash complements the Altaria & Alolan Muk.

When you've completed your party, go into real PvP battles and test your party combination. Doing so will allow you to gain experience & check if your party is powerful or effective in real battles.

Check Which Pokemon Other Trainers Use

While you're competing, take note of which Pokemon appear often in the battles. Always keep this in mind. as it will leave you better prepared to deal with other trainer's Pokemon parties and help you come out the victor!

The Pokemon GO Battle League started February 2020. Trainers can participate according to their level and win rewards!

There Is A CP Limit Per League

PvP Trainer battles in Pokemon GO are separated into 3 leagues - Great, Ultra, and Master. The Great & Ultra Leagues limit the CP of Pokemon you can bring into battle while the Master League has no CP limit.