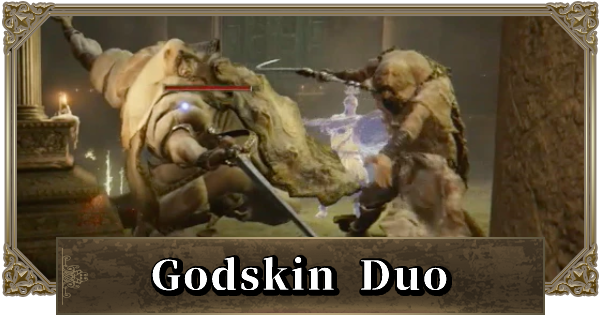 There are several powerful Knights in front of the boss room. If you are unlucky, the attacks of these knights may come through from behind the wards at the start of the battle with "Godskin Duo. Leave the wards as soon as you enter the boss's room.

How To Cheese Godskin Duo

▲You can call him at the entrance to the boss's room at the bottom of the stairs.

After completing Bernahl's request at Volcano Manor and defeating Rykard, you will be able to call NPC Bernahl from the Golden Summon Sign. If you can't win against Godskin Duo, proceed to Questline as a top priority.

Sleep works for Godskin Duo. By putting them to sleep and leaving them there, it is possible to get into a tie-up with them for a few dozen seconds. Sleep Pot with high Sleep status consumption or Sleep Arrow which is easy to use is recommended. If they wake up, put them to sleep again.

Powerful Spirit Ashes, such as the Mimic Tear Ashes, are more than just decoys. If you find yourself at a dead-end, your first priority should be to acquire and strengthen Spirit Ashes. The recommended Spirit Ashes are listed in the article below, but "Dolores the Sleeping Arrow" is also useful against Godskin Duo, as it inflicts Sleep status.

Godskin Duo will revive when the survivor chants at the time when one of them is killed. Try to deal more damage before one starts chanting. If you put them to sleep, you will have a big opening, so if you attack them intensively with Bernahl and others, you may be able to defeat them without waiting for them to revive.

Utilize The Pillars To Fight

There are pillars in the area, and it is important to hide behind these pillars and use them as a safe spot to heal or to shield opposing attacks. Long-range thrusts will penetrate through the pillars, but so will Sorceries and Skills, so you can safely inflict damage. However, be aware that the pillar will be destroyed if it is attacked for a few seconds.

Destroyed Pillars Can Be Used Against Attacks

Even though the attacks from the Godskin Duo destroy the pillars, its roots will stay intact to the ground. Their Black Flame attacks are not used regularly and you can use the pillars to stop their movements. So try to use the opportunity in fights.

Watch Out For Their Black Flame Skills

Godskin Duo throws Black Flame at a distance. Since the incantation is strong and it can be fired repeatedly, always be on the lookout for it when you are healed. It is also recommended to use a pillar as a shield. Incidentally, you can bounce them back with the skill "Carian Retaliation," so you can also fight them with a steady Fire Parry.

Split The 2 Bosses & Focus The Attack On A Single Target

First, attack one of them to take the target and lure it to a position directly opposite to another one. Then dash up to the one that Bernahl and Spirit Ashes are fighting and attack it intensively. The lured one will not approach immediately due to the pillars. If you put it to sleep further, the difficulty level will be drastically reduced.

After defeating one of them, the remaining one will chant to revive the defeated Godskin. While reviving, they are unprotected, so it is easy to gain damage. Ignore the revived enemy, and just finish defeating the one your party is currently attacking. Repeating this will reduce the amount of time you have to deal with two enemies at the same time.

Beware Of Attacks During Transformation

Each Godskin will shift into a reinforced form when its HP is reduced to half. They attack in a very wide range. Approach the Godskin Apostle's body extension move and avoid the Black Flame Cleave attack by moving away from it. For the spinning attack of the Godskin Noble, guide it to hit the pillar as much as possible.

Godskin Noble's Rolling Attack Can Be Blocked By The Pillar

The spinning attack of the Godskin Noble is extremely difficult to avoid or guard against. However, if it hits the center of the pillar, it will stop moving while spinning. Since the attacker's movements will also stop, you will be forced to fight a one-on-one battle with the Godskin Apostle, keep this in mind as one of your battle strategies.