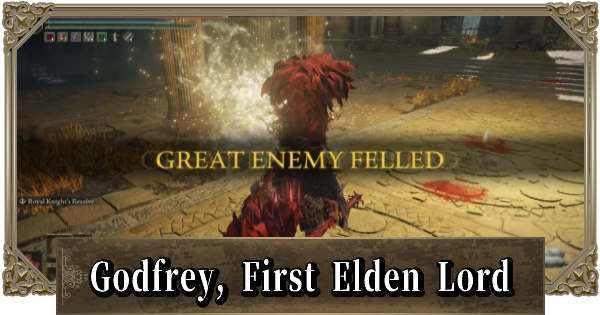 Godfrey, First Elden Lord (Golden Shade) appears inside Leyndell, Royal Capital in Altus Plateau. It is a boss that is required to be defeated in order to progress the story.

Near the story's ending, Leyndell becomes Ashen Capital. You are going to fight Godfrey again. His appearance is the same but the behavior is different. There is a second phase when his HP reaches 50%. During this phase, he changes stance and becomes Warrior Hoarah Loux.

Fight With A Small Weapon Type

Godfrey is susceptible to the attacks of small weapon type. With that said, hefty weapons are prone to counterattack due to its sluggish movement. It is recommended to fight with a weapon type that can throw swift attacks.

Easily Avoid Attacks From His Back

If you stay behind Godfrey, it will be easier to avoid his attacks. Also, since he has a lot of opportunities to counterattack, always move around and stay behind him.

An Opening To Attack

After his continuous attacks, there is an opening that is very obvious. Godfrey's attacks are divided into several attacks. Attempt to land a hit in between his attacks. After he throws his last attack, you have ample time to land a hit.

How To Avoid Attacks

Godfrey has an attack where he stomps on the ground and a fan-shaped spike rocks would appear. By dodging forward, you are able to avoid this attack. Since the attack happens on the rear, do not dodge backwards

When Godfrey jumps and slams the ground with his axe, dodge it by rolling forward. An opening is available so attempt to land an attack on him.

Godfrey jumps with great height then throws his weapon at you. Shortly after throwing his weapon, Godfrey rushes to get his weapon then performs an upward thrust.

Do not hit avoidance repeatedly

Godfrey's attacks have delays in between but sometimes change the timing of his attacks, and charge attacks, so observe for the perfect timing to land a hit . If you get hit repeatedly due to sudden change of his attacks, his damage is increases. Avoidance is firmly determined by Godfrey's movements and it doesn't seem to be a repetitive roll & hit.