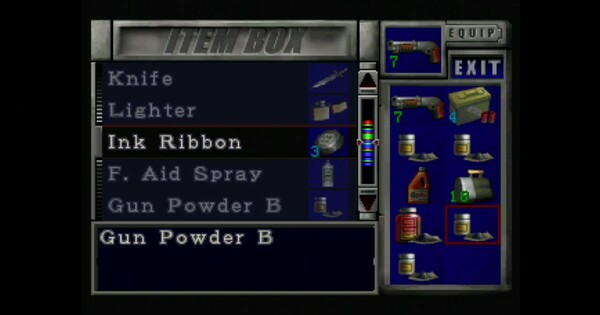 Find all Gunpowder recipes & combos Chart in Original Resident Evil 3: Nemesis with this Guide! Read about how to mix Gunpowder A, B, C to get ammo & craft Enhanced Ammo in RE3 Nemesis!

What Is Gunpowder Reload Skill Bonus?

Get More Ammo By Reload The Same Type Of Ammo More

Example of reloading AAB ammo on the 4th time

How To Craft Enhanced Ammo

On your 7th reload of the same ammo type (Handgun, shotgun), you get the choice to turn them into Enhanced Ammo instead. Enhanced Ammo deals more damage per shot.

Only Handgun & Shotgun ammo has the options to craft Enhanced Ammo. Other weapons such as Magnum & Grenade Launcher does not have this option.

Get A Bit Less Ammo When Crafting Enhanced Ammo

You get a little bit less ammo when reloading Enhanced Ammo compared with standard ammo. However, the increased damage & efficiency of the Enhanced ammo makes it worth it.

Cannot Be Used For Eagle Handgun Or M37

Enhanced ammo cannot be used by non-default weapons, meaning you can't use it for Eagle Handgun & M37 Shotgun acquired by defeating the Nemesis. If you focus on these weapons, skip making Enhanced ammo.

By mixing Gunpowder with standard Grenade Round, you can create Special (Flame, Acid, Freeze type) grenade rounds. This function can be used to get grenade rounds types when none can be found.

Need 6 Grenade Round To Mix

You will need 6 Standard Grenade Round to make the mix with gunpowder. Less then this amount and you cannot combine.

Does Not Increase Ammo With Reloading Skills

Combining Grenade with gunpowder will always yield the same amount of Typed grenades, regardless of your gunpowder reloading skills. You may have crafted Grenade rounds multiple times, and it will not affect the outcome.