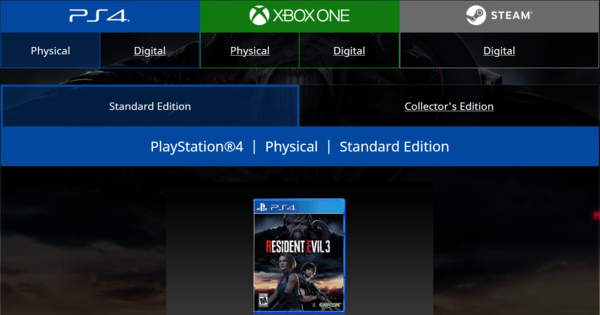 Resident Evil 3 Remake | RE3 Remake
Is There Nintendo Switch Version?

Check out this guide to see if Resident Evil 3 Remake is coming to Switch platform or not! See if Switch is joining PS4, XBOX ONE & PC in the supported platform for RE3 Remake!

Is There Switch Version For Resident Evil 3 Remake?

No Nintendo Switch Version Yet

Switch is not on the list of supported platform in the official RE3 Remake product information page. No Nintendo Switch version of the Resident Evil 3 Remake has been announced as of now.

The new HD version of the original Resident Evil was released on Switch on May 19, 2019, so there is still hope that it may be ported to Switch in the future, though Resident Evil 2 Remake may come out before RE3 Remake.

File Size May Be An Issue

RE3 Remake stands at a whopping~ 22 GB in size just for the base game alone. With Resistance, it increases to ~43 GB. File Size might be an issue when porting RE3 Remake to the Switch.

Coming To PC, PS4, XBOX ONE

Resident Evil 3 Remake will arrive on PC (Steam), PS4 and XBOX ONE on April 3. There will be both physical & digital copies available, though the Collector's Edition is physical copy only.