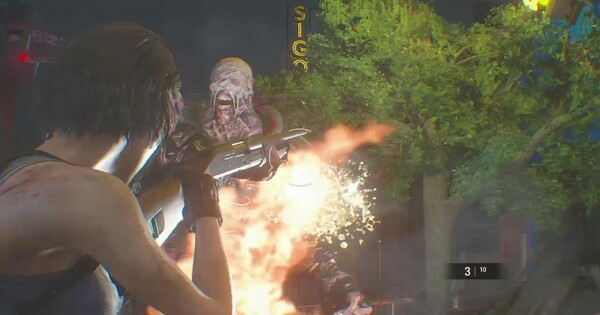 Check out this guide on how to beat & escape from Nemesis in Resident Evil 3 Remake! See Nemesis's weakness, mechanics, item drops & tips on how to beat and kill it in RE3 Remake!

You cannot kill Nemesis until the end of game as story progression. You can only down it for a while before it returns.

Can Down it Momentarily

You can down Nemesis by dealing huge amounts of damage to it. How long it remains downed is determined by the way it behaves when down.

When Nemesis's is downed but his head is not lowered, he will remain down for approx. 8 seconds. Get ready to run or fight again based on your situation.

If Nemesis's head was lowered while its down, you get around 30 seconds before it rises again. Run to another region while it can't move.

Will Not Enter Safe Room

Nemesis will not enter a safe room (A room with the container box). It may be waiting for the player when you leave, so prepare to run when exiting.

May Not Enter Certain Map Regions

There are certain areas where the Nemesis will not enter for story purposes. Nemesis does not enter the Railroad Company for example. It also don't enter the Toy Uncle where the green jewel is at.

Deals Massive Damage For Most Moves

Nemesis attacks deals a lot of damage and can bring Jill's health to Danger very fast. Don't try to just run, but manage its attacks with dodge.

Use evade to dodge from most Nemesis's attacks. Roll your joysticks to trigger the dodge in that direction.

Move Around While Under Shockwave

Nemesis's shockwave attack is hard to dodge from but the player can still move around when under its influence. Move away from Nemesis and prepare to dodge its follow-up attack.

Nemesis will bring on the Rocket Launcher after you move on from the Kendo's store. Its not as scary as it looks due to the tracer laser mechanics but the damage is high if you're caught unaware.

How To Dodge Rockets

How to Dodge Enemy Attacks

How To Beat Nemesis - Tips

Use Environmental Items For Advantage

You can use the environment hazards & items to gain the upper hand in your Nemesis fights.

Circuit Boxes when hit will release a stunning wave that affects Nemesis as well. It can be used on cooldown multiple times to make battle easier. Stunned Nemesis can be easily targeted with a Grenade.

Barrels does large amount of damage to Nemesis if you can set it off in time. While its hairy to aim for barrels when Nemesis is chasing you, it might be worth it for the damage.

Nemesis's heart and the metal plate is where its main weakness is at. Shoot it with powerful weapons like Shotgun. In different forms, its heart is still the prime target to hit.

Nemesis will use its arms to protect its weakness if you keep attacking it. Wait a bit before targeting it again

Headshot May Also be A Weakness

Nemesis's head may also be a weakness based on in-game dialogues. Its more difficult to hit, so don't target it unless Nemesis can't move like while stunned.

Attack Weakness After A Successful Evade

Time will slow down after a successful dodge. Use this window to hit weakness easily. As dodging is a vital part in fighting nemesis, master the technique to get defense and offense at the same time.

If you down Nemesis while its chasing you, it drops a supply case containing Custom Parts for your handgun. There are 2 custom parts to be had this way.

Check Out All Custom Parts Here!

When Can You Down Nemesis?

There is a restricted amount of Nemesis chases meaning that the chance to get custom parts drop from him is limited. These opportunities are:

How To Beat Nemesis During Pursuit

Use Grenades To Deal High Damage

Grenades deal massive damage and should be used to beat Nemesis. There are 2 Grenades in the first area.

Get Handgun Parts From Safe

Get the Red Dot Custom Parts in the warehouse safe to make your Handgun's recticle stabilize faster. It will be of aid to defeat the Nemesis.

By using the safe room in Moon Donuts and the "No-Safe room Entry" mechanics, you can safely cheese Nemesis by using this dash and shoot method, though it may take some time to down it.

Only Fire 1 Shot Each Time

There's only a window of 1 shot before Nemesis can give you a piece of his mind. Don't be greedy.