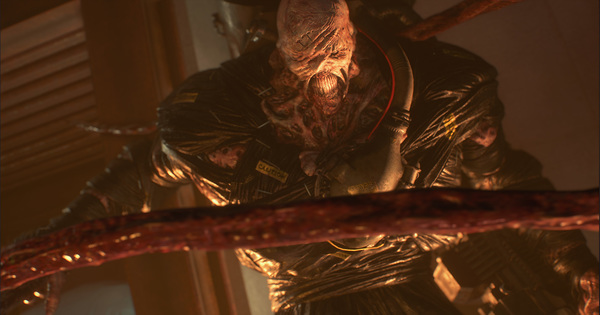 Find out what enemies and monsters you'll face in Resident Evil 3 Remake! Check out this guide for all the list of enemies in RE 3 Remake, their characteristics, & weaknesses here.

The apex predator of Racoon City returns tougher than ever in the Remake, being able to pull you close or rappel through terrain with his tentacles. Use all you have in your surroundings to fend off this indestructible stalker.

Learn How To Beat Nemesis Here!

Nemesis Is a Recurring Enemy

You will not be able to fully kill Nemesis until you reach the later parts of the game! Nemesis' attack patterns and behavior will change each time you encounter it, so you will need to adapt and use your surroundings to overcome each encounter!

The standard infected and plentifully abundant. Does not move fast, and can be dodged. Their deadliness is in numbers, try avoiding them to conserve ammo.

A variant of the standard zombie created by Nemesis, these special zombies attack with its tentacles for mid range. Its head is protected so shoot its body until it exposes the orange funnel on face and then target it from there.

Another classic enemy, the Hunter β is a swift assassin that will charge you, and slice your head off in a insta-kill. Head shots and Acid Round from a Grenade Launcher will kill them fast.

Another staple of the original, the reptile - frog like Gamma version of the Hunter will swallow Jill whole for an instant kill, making it difficult to run past from. Grenade Launcher or Magnum is best used to counter them.

The bug-like skittering Drain Deimos can run up walls, attacking from different angles. They love to charge you with its claws and deadly parasitic attacks.

Learn How to Kill Drain Deimos

Forces In Parasites With Attacks

When Drain Deimos get close, they may sometime initiate a parasite attack. This parasite is dangerous as it is hard to remove and will not go away.

How To Cure Parasite Status Guide

An old face from RE2, the licker attack with its claws and whip-like tongue. It is found in RPD Police Station and thus only encountered by Carlos.

Learn How to Kill Licker Here!

The Licker is blind and only responds to sound and gunfire. If you can somehow walk around it slowly without touching it, you might be able to pass it without combat.

This albino shambler is an extremely hard target to take down due to its healing factors rapidly rebuilding its wounds. Be sure to keep a powerful weapon burst like Shotgun or Magnum at hand when facing this enemy.

Learn How to Kill Pale Head

The staple of the series, the fast and agile Zombie Dogs makes a return. Using a shotgun blasts and quick aim on your Handgun will make short work of these speedy foes.

Learn How to Kill Zombie Dog

Know Your Enemy and Prepare Accordingly

Knowing your enemy and equipping appropriate items and weapons is the most effective way of getting out alive. Some enemies only appear in specific area (like dogs in downtown), so gear up before heading out.

Each Enemy has resistance and weakness to certain types. Acid Round kills Hunter β in one shot while Pale Heads goes down with 1 shot with the Magnum.

You can make ammo and special grenade rounds by combining gunpowder & explosives. Keep on to these items so you can make enemy specific ammunition when you encounter them.

Another way to deal with enemies fast is to use Assault Coins. It is a Shop item that can be bought with points. Using all 2 assault coin will increase your damage by about 100%.

Sound plays a vital part in finding out if an enemy is nearby. The moaning of zombies for example is the perfect early warning of bogeys around.

Resident Evil 3 Remake, like RE2 Remake, will focus on horror survival where resources will be tight. You'll probably won't have the ammo to kill everything you encounter, so try avoiding enemies instead of guns blazing.

Check Out How to Dodge Enemy Attacks Here!

Face Different Enemies Based On Character

You face different enemies based on the playable character and their story progression. Carlos gets to shoot Lickers while Jill needs to deal with Hunter γ (Gamma).