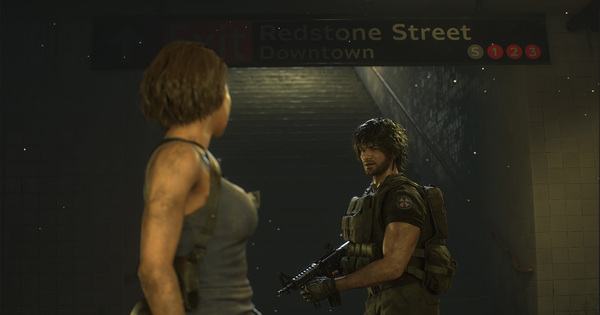 Check out the confirmed characters appearing in Resident Evil 3 Remake! See who the main, playable & support characters are, their voice actors, & their bio in RE3 Remake.

The protagonist of RE1 returns to take the helm in RE3 Remake, now trying to get out of the dead-infected Raccoon City. She will find allies, a stalker, conspiracy, and challenge along the way.

Carlos was a former Guerrilla fighter who joined Umbrella's U.B.C.S. Mercenary taskforce, who are now sent to Raccoon city to "evacuate civilians". Though his platoon was decimated by the monsters, he maintains his vows to rescue as many people as possible.

Footage from the original

Carlos gets a new appearance from the original version, with messier hair & a dank mustache. He will continue to provide Jill with much needed support.

The wounded commander of the U.B.C.S.platoon sent into Raccoon City, Mikhail is worn down by his injuries and destruction of his men. However, he still maintain his position to save as many survivors as he can, for as long as he can.

A scheming former Spetsnaz fighter, Nicholai has deep agendas with the capabilities to push them into fruition. His self-preservation first attitude makes him a wild card in the chaos of Raccoon City.

First appeared in RE1 as the Helicopter pilot for S.T.A.R.S team, Brad makes a return in RE3, saying he is being chased by...something. Though he tends to run from trouble, he assists Jill in her investigation of Umbrella.

Dario was first seen at the start of RE3, where he locks himself in a truck. Heartbroken by the death of his family at the hands of Zombies, Dario don't care about escaping.

A skilled hacker of many campaigns, Tyrell supports Carlo's head-long charge into a situation with his capabilities to crack securities and computer systems. He has his suspicions about Nicholai, but is focused at tasks at hand.

A skilled sniper with a obscure past, this former Marine now has a hard time fighting the nightmares in Raccoon City due to an unfortunate encounter with a zombie. Things are not looking good for Murphy as the dead closes in.