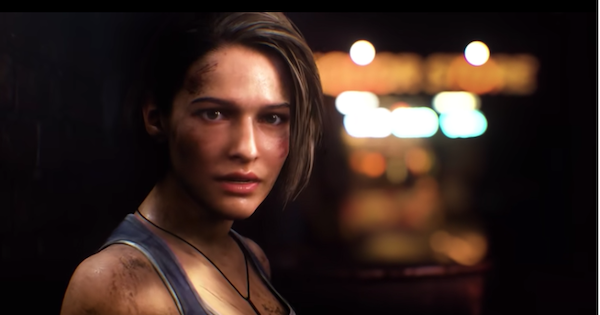 Delta Force training made Jill a natural fit for the Raccoon Police Department's special forces team, S.T.A.R.S., and her knack for picking locks and handling explosives have made her an especially outstanding team member.
However, Jill is one of few surviving members after the team saw numerous losses to the a deadly virus now known as the Mansion Incident.
Jill is determined to continue investigating Umbrella, the creators of the deadly T-Virus at the heart of the incident, but her investigation has been impeded by a suspension and an order to remain at home.
What's more, her apartment appears to be under round-the-clock surveillance. The city is under Umbrella's control, with the police force included. Jill has decided to escape Raccoon City in order to bring Umbrella's evil to light, but this may not prove so simple...

Quoted from RE3 Remake Official Site

Jill Valentine's face in the Remake is modeled after Sasha Zotova, a Russian model. She herself has stated that she's been working with Capcom for this purpose.

In the 2002 HD remake of the original Resident Evil, Jill Valentine's face was modeled after Canadian model Julia Voth.

Who Is Jill Valentine?

Jill Valentine was the Protagonist of the classic hit Resident Evil 1 that started the franchise. She belongs to the elite S.T.A.R.S police unit, and excels in lock picking.

Survivor Of The Mansion Incident

Jill, along with Barry, Brad, Wesker and Chris are the survivor of the first virus outbreak known as the Mansion Incident (RE 1). There, she found out the Umbrella's connection to the undead virus, and has vowed to stop them.

Costume Pack For Jill By Pre-Ordering

Get the classic costumes back featuring Jill & Carlos's outfit in the original game by pre-ordering the game! Note that the costumes are cosmetics only.

Something for the hardcore fans! A unique Jill's Figure will be included in the Collector's Edition, just like the Leon's figure introduced in the RE2 Remake.