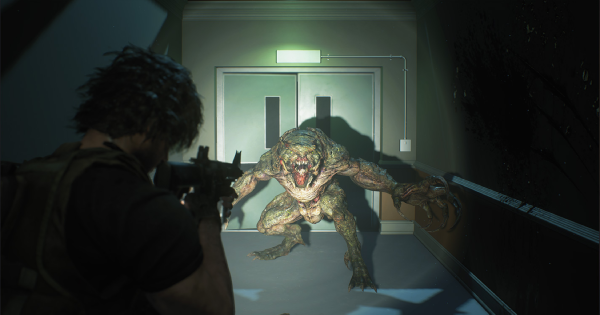 Learn how to defeat and avoid the Hunter β (Beta) in RE 3 Remake (Resident Evil 3)! Find out their weakness, attacks, location, and more!

How To Kill Hunter β (Beta)

Use A Powerful Weapon

The Hunter β (Beta) is nimble and deadly foe, often difficult to outrun. It is crucial to make each encounter with this beast a quick one; use either the Magnum or the Grenade Launcher to finish it off.

Check Out All Weapons Here

Aim For Its Head

You can expose the Hunter β's weakness by firing at its head. Focus fire on this spot to finish it off before it gets a chance to deal damage.

Shoot Its Legs To Immobilize It

You can also damage its legs to trip the Hunter β to slow it down to pump lead into its weak spot.

Use Flash Grenades To Stun

The Hunter β's speed can be negated with the use of Flash Grenades. Use this opening to deliver a killing blow.

The speed of the Hunter β far surpasses your own, & may sometime spawn in pairs. When you encounter this foe, be ready for a fight til the end.

The Hunter β first makes its appearance around mid to late game, in the Spencer Memorial Hospital . Your first encounter will be while playing as Carlos, use his superior physical capability and arsenal to take the beast down.

A Hunter β will also appear in the Underground Storage, ambushing you in the dark. You will be needing to fight it in a confined space, keep your shotgun at the ready!

Multiple Hunter β will ambush you in the NEST 2 lab in a confined space. Focus your fire on one target at a time to minimize your damage.

Aside from its deadly quick claw swipes, the Hunter β can also kill you in a single slash after it attempts to attack after a roar. Listen to its audio cue and kill or prepare to dodge.