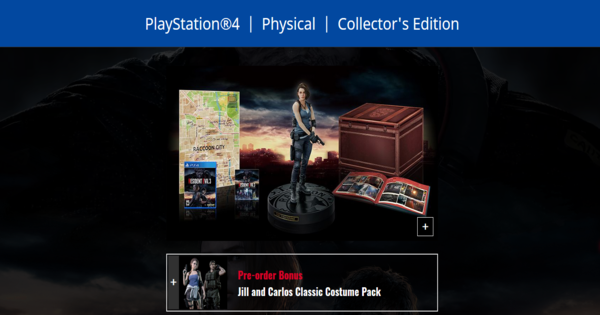 Resident Evil 3 Remake | RE3 Remake
Collector's Edition - Which Edition Should You Get?

Which RE3 Remake Edition Should You Get?

Price may vary based on vendor

The standard edition is adequate for new and returning players to the Resident Evil franchise. It includes the base game and an original version costume set if you preordered the game.

Whats the Differences of Remake Vs Original?

If you're die-hard fan of Resident Evil 3 or the franchise, nothing will give you more value than the Collector's Edition. Notable contents include the Jill Valentine Figure, Art Book and Raccoon City Survival Map!

Which Edition Will You Get?

All Editions Include RE: Resistance

All editions of the Remake includes RE Resistance: A multiplayer- PVP game experience set in the Resident Evil Universe! No need to give up anything if Resistance is also on your radar!

What's In RE3 Remake Collector's Edition?

Standing at 11-inchs, this painted figure of Jill Valentine in her new outfit is a must have if you're a hardcore fan!

A physical copy artbook is included in the pack containing lore and key scene of Resident Evil 3.

A map of Raccoon City with valuable tips on how to survive written on it. Makes an interesting wall hanger or table decorations.

As with all versions, preordering the game before final release will get you a Classic Costume Pack including costumes for Jill and Carlos.

Check out the Original RE3 Guide here!

The Collector's Edition comes with physical copy for PS4 / XBOX ONE only, making the base game inaccessible for PC players if purchased.

What's In RE3 Remake Standard Edition?

If you preorder the game before final release, you'll get a Classic Costume Pack including costumes for Jill and Carlos based on the original game!

The Standard Edition is also available as a digital download on PS Store, Xbox Games Store, and Steam. The PS4 Digital version comes with a RE3 special theme.

Z version refers to the "Adults only 18+" age-restricted version of the game, available in Japan. As it has a higher age restriction, it is more gruesome and disturbing graphics than the standard Remake. It might be available in the future for western audiences.

Resident Evil 3 will be released on April 03, 2020, arriving on PS4, XBOX ONE, and PC (Steam). The game has both physical & digital copies, though only digital copy will be available for PC.