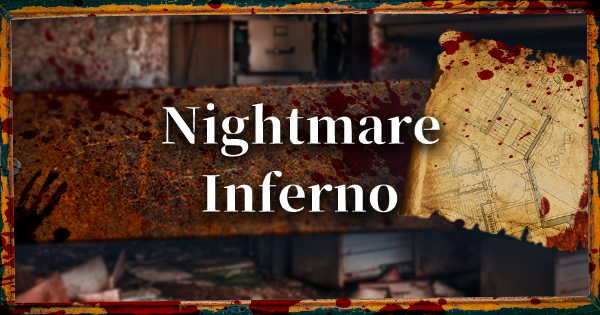 Read this Resident Evil 3 Remake (RE 3) for how to beat the Nightmare & Inferno Difficulty! Find out the requirements to unlocking these modes, tips to get S rank, and more!

How To Unlock Nightmare & Inferno Difficulty

In order to unlock Nightmare difficulty, you first need to finish the story campaign on Hardcore. You will unlock this difficulty regardless of your final rank once completed.

Similar to Nightmare, you will need to complete the game on Nightmare to unlock Inferno difficulty. In this game mode, the enemies are even more deadlier than the Nightmare mode, Auto Save will be unavailable, and number of save points will be reduced.

Tips For Getting S Rank On Nightmare & Inferno

In the Nightmare difficulty and above, most enemy spawns and location have been greatly altered specifically tailored to kill you off. You will be often ambushed by unsuspecting spawns like Pale Heads in RPD, Hunter γ right below the ladders and more. Learn through trial & error to know enemy locations and seek out the best way to fight through the horde!

Conditions To Get S Rank

Beat The Game In Less Than 2 Hours

You will need to complete the game in less than 2 hours in order to get the S rank. Avoid any unnecessary combat and speedrun through the shortest course. Using the Shop feature to acquire key items well in advance will help tremendously to shorten the time needed.

Only Up To 5 Saves Allowed Per Run

One other condition you will need to get the S rank is the number of saves made throughout your run. Try only saving on crucial moments like before the boss fight.

Number Of Deaths Do Not Count

Your number of deaths do not count towards the conditions to get S rank. However, continuing the game after you died will still count towards your total playtime. Be sure to return to the title screen to load your game instead of choosing continue when you die.

The saving grace of these high-difficulty run is that all infinite ammo weapons are allowed to be used to get the S rank. The infinite rocket launcher in particular is highly recommended to make your enemy killing a breeze.

Use Shop Items To Shorten Time

Using the Shop to purchase crucial Key Items in game is also highly recommended as it can give you quick access and shortcut sections in the game.

Learn What You Can Buy In Shop

Using 1 save in the electric substation is recommended. Save after you have restored the power if possible. You will encounter Nemesis on your way back so be prepared and reload if you die.

Save before your first scripted battle against Nemesis. As it will continue to pursue you after the battle, saving here is a must!

Or Save In Carlos' RPD Stage

If you are confident that you can push through without saving, the next save should be in the Police Station once you have control of Carlos.

After Carlos' Police Station, the next save should be done in Jill's Dilapidated Shelter. This one is for preparation for the fight against Nemesis' 2nd form.

After finishing Carlos' Hospital section, save once you have regained control of Jill. As the save points in the fuse stage and laboratory stages are gone, saving here saves you from the trouble of backtracking or going back to the Dilapidated Shelter.

Before The Last Boss

Save before the last fight against Nemesis. This battle might be the hardest in both difficulties as getting hit by Nemesis can immediately knock you out.

As the enemy placements have changed in higher difficulties, be proactive in checking corners and rooms before you enter. Getting attacked can easily leave you in a critical state, so use your rockets to clear hidden enemies.

The Nemesis relentlessly pursuing you in the Downtown area can severely impede your chances of getting through. Remember to move after you take it down with continuous attacks. Also, it is recommended to take it down if it appears, so as to give you more time.

Last Battle Is The Hardest

▲Most deaths in Inferno difficulty are likely from Nemesis' final form as dodging its attacks is more difficult.

The last form of Nemesis cannot be defeated with just normal attacks. Even if you have the Infinite Rocket Launcher, you are still required to use the Railgun. Also worth noting is that getting damaged by the first of its 3-hit combo locks you down, guaranteeing your death.

Bait It To Attack

A technique to defeat the last form of Nemesis is to entice it to attack. Use the side generators to bait it to attack. It usually uses 3-hit swiping attack that can easily be dodged, giving you enough time and allowing you to open fire at its parts.