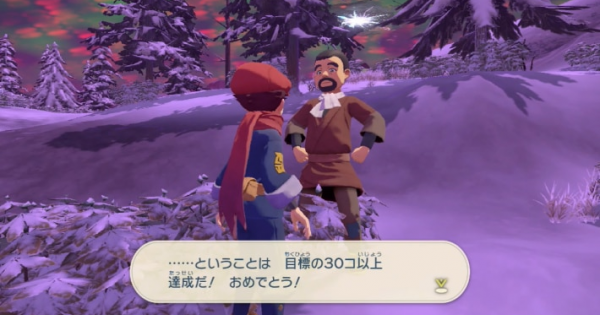 Balloon Race in the Icelands occurs when you talk to the man that handles the Balloon Race event after you've set up the Icepeak Camp. However, to unlock this request, you'll need to complete the Request 78 first.

Setting Up The Icepeak Camp: Request 78

Use the four Pokemon Mounts to your advantage.

The Balloon minigame makes full use of the four Pokemon: Wyrdeer, Sneasler,

Basculegion, and Hisuian Braviary so make sure you know how to navigate each.How To Ride A Pokemon

You'll Need To Pop 30 Balloons To Complete The Request.

The difficulty level is quite high as you have to switch between four Pokemon rides to proceed. Try it again and again to learn the route and switching points.

The first time you pop a balloon, you'll start out with Wrydeer. Make it the top of the cliff while dashing.

After The Jump From Hisuian Braviary Change To Sneasler .

After jumping with Wryderr, switch to Hisuian Braviary, and when you hit the cliff, switch to Sneasler and climb up to the top.

As soon as you climb the cliff with Sneasler, switch to Wrydeer. If you are about to jump straight into the lake, it will automatically switch to Basculegion

There are two places in the lake where you can pop balloons by doing a double jump with Basculegion twice. You'll need to switch to Hisuian Braviary immediately after the second double jump.

After The Second Double Jump, Switch To Hisuian Braviary.

If you dash after switching from Basculegion to Hisuaian Braviary, you'll lose too much altitude and won't be able to pop some balloons so be sure to proceed at the right speed.

The Point Of Plunge

If you've been flying with Hisuian Braviary for a certain amount of time, there will be a point where you need to dive. You'll need to pop the balloons during the dive, so be sure to control it properly.

After you dive and break one balloon, you'll need to immediately jump to Wrydeer and switch to the Hisuian Braviary. After switching, dash to the left.

h3: Watch your point of view after landing.

After landing on land with the Hisuian Braviary, you'll have to control the Wrydeer. There's a sharp curve and you'll need to control your viewpoint to pop the balloon.

h3: Switch to the Hisuaian Braviary after the jump.

After jumping off the cliff, switch to Hisuaian Braviary and pop the balloons in the sky. Dash through the balloons on the way to pop them while lowering your altitude. The last balloon is in a very difficult position to aim, so use your dive to pop it.