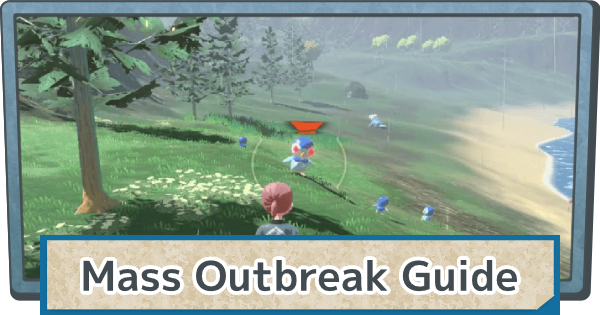 Check out our guide on Mass Outbreak Shiny Guide: How To Unlock in Pokemon Legends: Arceus. Learn more about mass outbreak, shiny, hunting, how to unlock, guide and so much more.

How To Select A Mass Outbreak

Mass Outbreaks usually appear randomly, so it takes a lot of time for one to appear and usually some of those outbreaks have selected Pokemon in them. With that said, you'll have to enter in and out of Jubilife Village and back into the map to get the Pokemon you wish to encounter.

Some Pokemon Will Not Appear In Mass Outbreaks

Note that some Pokemon don't appear in Mass Outbreaks. For example, Legendary Pokemon will only appear in Space Time Distortions. If there's a particular Pokemon you're aiming for, be sure to check the list below before attempting to find them in Mass Outbreaks.

Check The Pokemon That Don't Appear

List Of Pokemon That Don't Appear In Mass Outbreaks

Because of the large number of Pokemon during outbreaks, you are more likely to see a Shiny version.

You Can Carry On With Your Research Tasks Simultaneously

During Mass Outbreaks, 3 to 4 Pokemon will appear in groups. This can help you progress a lot faster with your Research progression by defeating or capturing these Pokemon. Going to Mass Outbreaks and capturing/ battling Pokemon is one of the most effective ways to clear Research Tasks.

Things To Know About Mass Outbreak

If You Don't Go To The Relevant Area, The Mass Outbreak Will Disappear

▲ Upon arriving to a specific area, specific Pokemon from other areas will change.

If you go to a certain Pokemon, the rest of the area will change. If you want to leave a Mass Outbreak to be at its current state, avoid going to other Mass outbreaks.

If You Don't See The Pokemon You're Looking For, Go To An Empty Area

If you go to an area where a mass outbreak is occurring, the Mass Outbreak will remain the same. If the Pokemon that you are targeting is not appearing, go to an Empty Area to reset. If you are not aiming for anything you can either go to an empty area or go back to the village.

You Can Only Reset A Few Times Randomly

You Can Start Over When You Save Data

You can resume the game and start over if you store the save data with the location of the Mass Outbreak, even if you switch to another Pokemon. Don't forget to turn off the auto save feature so it doesn't save automatically.

Avoid Battles As Much As Possible

Battles during Mass Outbreaks are basically many vs. one, and you are likely to be at a numerical disadvantage. Because of this, unless you have a very powerful Pokemon, avoiding battle is recommended.

If you want to obtain an Aggressive Pokemon, it is recommended to use items such as Stealth Spray and Smoke Bomb so you can sneak behind the Pokemon and capture them.

What Is A Mass Outbreak?

Makes It Easier For Certain Pokemon To Spawn

Mass Outbreaks are events wherein Pokemon spawns a specific area multiple times. In the map, there will be 3-4 same Pokemon species which often includes an. Alpha Pokemon.

Icon Is Displayed On The Map

If you're using the save method yo farm outbreaks for shinies, please note that with the Daybreak update this no longer works :(