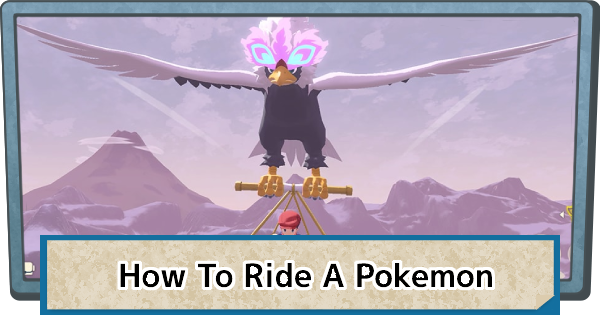 How To Ride A Pokemon

During your adventure, you'll receive the Celestica flute which gives you the ability to mount Pokemon in the land, water and air. Not only you'll be able to move quickly, but it can also be used to get you across the water & fly you over the hills.

Riding a Pokemon can be done with ease with the press of the + button. You can easily run with Wyrdeer into a cliff and switch to Hisuian Bravery quickly when jumping off a cliff.

When you are riding Wrydeer, you have the ability to move at high speed. You can also accelerate further with the dash & jump over obstacles, which is useful for moving on flat ground such as the grasslands.

Become A Treasure Hunter With Ursaluna

When you are riding Ursaluna, you have the ability to look & dig for buried treasure underground. Once Urasaluna has sensed a treasure, head in its location the press the Y Button to dig.

▲ Press the Y button when this alert appears on your screen

Not Suitable For Moving Around

Traverse The Lake & Sea With Basculegion

When riding Basculegion, you can traverse the waters in rivers & the sea. You can also catch wild Pokemon while in the water, this is pretty similar to the Surf HM/TM from previous games.

Soar Through Skies With Hisuian Braviary

With Hisuian Braviary, you can soar through the skies with ease and fly over hills & mountains. This is also pretty similar to the Fly HM/TM from previous games.

While riding Sneasler you can climb hills mountains and even trees. This will let you reach some areas that are hard to reach by riding Wrydeer or Basculegion.