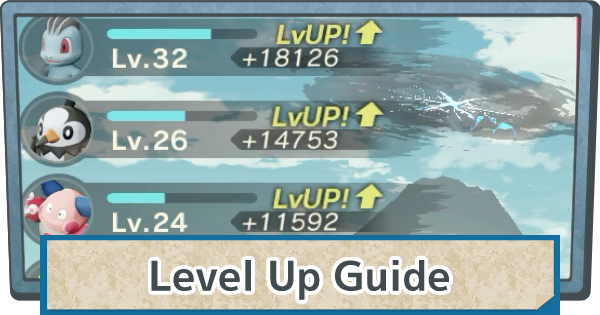 Pokemon Legends Arceus
How To Level Up Fast: EXP Farming

Level Up Guide: How To Gain EXP in Pokemon Legends: Arceus? This includes leveling tips in early & middle stages, how to level up fast, farm EXP, Alpha Pokemon to defeat, & more!

Efficient Way To Level Up

Best Way Is To Level Up By Defeating Blissey

This method is very efficient from the moment you can ride "Wyrdeer" to the end of the game. Alpha Blissey can give more than 10,000 experience points in one battle, and at the same time, you can get Exp Candy L and so on.

Go To The Grandtree Arena

First, let's fly from the map to the Grandtree Arena. If you open the map and tap the Blue Feather Icon, you can go to that place instantly.

Catch Machop Along The Way

How To Climb The Cliff In Front Of The Cave

When you come in front of the cave, go to the cliff near the tree on the right, run diagonally upward to the left then jump, you will be able to go up where you cannot usually go.

Capture Machop On The Cliff

There is a "Machop" at the edge of the cliff, so let's catch it. After capture, go to the base camp, add to your inventory, and return to this place again. The "Mach Punch" is the key skill to defeating Alpha Blissey.

Go To The Area Of Alpha Blissey

Climb the cliff and follow the road to meet Alpha Blissey. If you are not ready, it is safe to save here.

Attack From The Back So You Get A Head Start

Alpha Blissey will channel a giga impact, dodge to the side to avoid it and hit it with a Pokemon from behind. All you have to do is attack using Machop's "Mach Punch" then withdraw from battle. Repeat this until defeated.

Blissey's HP Remains Low Even After Leaving The Battle

Even if you leave the battle after inflicting damage, the HP of Alpha Blissey remains low. By exploiting this, you can get a large amount of experience points and good item drops.

Use Fighting-Type Pokemon For Farming

Use the Machop that is catchable close to Blissey's area can be utilized to make the farming process incredibly easy and fast.

Blissey is a Normal-Type Pokemon, which is weak against Fighting-Type moves. It also has low defense stats, so physical-type moves are super effective. It is recommended to prepare Pokemon that are strong against Normal-Types.

After Clearing, Level Up At The Training Grounds

Fight Trainers By Talking To Ingo

If you clear the "Dangerous Mountain Climb" at the Coronet Highlands, "Ingo" will appear in front of the training grounds. If you talk to Ingo, you can fight some other trainers, and every time the match is over, the HP of your Pokemon will be fully restored and you will be able to obtain EXP.

Depending On The Training, You Can Level Up By Hitting The "A" Button Repeatedly

It's a small move, but after talking to Ingo, you can keep repeating the battle just by hitting the A button repeatedly, so you can watch the animation or kill time while hitting the button.

If you have a "Garchomp" that has a raised Effort Level, it will be easier to have 3 or more verticals,so if you do not have it, it is recommended to add the weakest Garchomp in your hand.

Click Here To Learn How To Raise Effort Levels!

Level 56 Gabite ( Alpha ) will appear in Coronet Highlands, so if you don't have it, it is recommended to capture it here.

Level 85 Garchomp ( Alpha ) will appear in Alabaster Icelands, so if you don't have it, it is recommended to capture it here.

How To Level Up In Early Stage

※ This is a guide to raise level to Level 25

This method is recommended for the early stages as the location is near the first base, Beautifly's level is already high, and the whole party gains EXP just by catching.

It takes a long time to reach this area because it is far away, but we also recommend Gastrodon in the Obsidian Fieldlands. All you have to do is capture it, and Gastrodon is good to go. A big advantage is that Gastrodon can also be used as a travel companion.

If the high ground base is already obtained, you can use the area to move easily to the Alpha Parasect area. Use the opportunity to raise your Pokemon level.

Other Ways To Level Up

Defeat The Alpha Pokemon Located On The Map

Alpha Pokemon can be located in each area on the map. Although they are a lot harder to defeat than normal Pokemon, trainers can obtain more EXP and item drops to help increase Pokemon level efficiently.

Bring More Pokemon That Is Weak Against

Even if there is a 10 to 20 level gap between you and the Alpha Pokemon, this can be beatable if you have multiple Pokémon that can exploit its weakness.

Retreat And Revive If Pokemon Faints

If the Pokemon who can exploit weakness faints, it is recommended to retreat and regroup first by using Revive to the fainted Pokemon. Since the Alpha Pokemon HP does not restore, you can use this strategy to defeat it.

Return To The Village To Make Alpha Pokemon Respawn

Alpha Pokemon will respawn in the same place, so after defeating them, return to the village and head to the same place again to level up.

You can get a lot of experience just by capturing high-level Pokemon on the map, so if you have trouble defeating the Alpha Pokemon, this is a good way to level up.

Use Rare Candy / EXP Candies To Level Up

You can also get valuable training items such as "Exp Candy" and "Items to raise Effort Level" by defeating Alpha Pokemon. It is recommended to use the candy on Pokémon you want to train after defeating them several times.

Thanks for the guide! I just beat the game and the Alpha Blissy will be a good way to grind for now.

Thanks for the guide! I just beat the game and the Alpha Blissy will be a good way to grind for now.