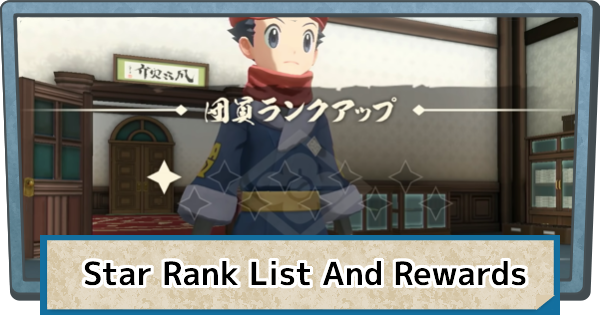 The highest priority is to achieve research level 10 for each Pokemon to receive 100 pts. The shortcut to raising your rank is to prioritize Research Tasks and reach level 10. Defeating and catching Pokemon make it much easier to reach Research Level 10 more quickly.

If you have captured a specific Pokemon, you can proceed with its Research Tasks just by seeing its moves in battle. The number of times you can observe Strong Style or Agile Style is set, so we recommend doing both with one move while in battle so you can hit two birds with one stone by advancing two tasks at once!

The team member rank indicates the main character's contribution to the Survey Corps. The number of areas you can go to investigate increases according to your rank, so raising your rank is essential to progress in the game.

After completing a Main Story mission, you will need to increase your star rank in order to acquire the next story mission. Be sure to actively increase your member rank if you want to progress with the story.

▲ You can receive rewards by reporting to Professor Laventon.

The amount of rewards you can get for expeditions varies depending on your star rank. The higher the member rank, the easier it is to make money.

▲ In Legends Arceus, the star rank is equivalent to the Gym Badge.

The higher your star rank is, the more your obedience level increases. Make sure to increase your member rank in order to have high level Pokemon obey you.

Makes It Easier To Capture Pokemon

How To Raise Star Rank

Progress With The Pokedex

In order to increase your Star Rank, you will need to fill your Pokedex a bit. Increase your research level by doing research tasks and report to Captain Cyllene, the leader of the Survey Corps.

▲ You can find her in the Galaxy Corps Headquarters.

Even if you have fulfilled the conditions for raising your member rank, it will not level up until you make a report to Captain Cyllene. Make sure to report to her if you want to increase your Star Rank.

Fill In The Pokedex And Collect Survey Points

Survey points are mainly obtained by raising the research level of Pokemon in the Pokedex which is done by completing research tasks. Research tasks varies for each Pokemon, so try to complete as much as you can to gain survey points.

How To Raise Research Level & Complete The Pokedex