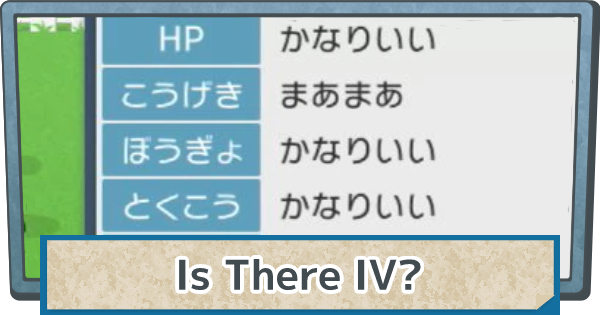 Pokemon Legends Arceus
Is There An IV (Individual Value) ?

This guide contains whether Pokemon Legends: Arceus has an IV or Individual Value. This also includes information about the IV replacement called Effort Levels.

Is There An Individual Value (IV)?

There Is No Individual Value (IV) In This Game

In this game "Pokemon Legends: Arceus", there is no IV unlike the other Pokemon series game. Therefore, it is no longer necessary to carefully select Pokemon with high Individual Values (IV).

Effort Levels Instead Of Individual Value

▲ The number displayed next to the status name

Since the maximum level is the same for all Pokemon if they have the same Pokemon, the same personality, and the same level, the status after raising their level will always be the same. The initial value of the level is random, but it will be the same in the end, so there is no need to forcefully select it.

How To Raise Effort Levels Guide!

What Is An Individual Value (IV)?

The individual value is the hidden status of a Pokemon, and it is like quantifying the talent set for each of the 6 ability value (HP / Attack / Defense / Speed / Special Attack / Special Defense). Individual values were randomly determined when Pokemon were caught or hatched from eggs.

There are 32 individual values from the lowest 0 to the highest 31, and the larger value, the higher the max stats. In addition, there are individual values that have a special name, such as calling the IV "31" "V". See below for details.

Does Not Change With Leveling Up Or Evolving

The Individual Value (IV) does not change as the level increases or when a Pokemon evolves. In order to raise the IV, it is necessary to use an item called "Bottle Cap or Gold Bottle Cap".