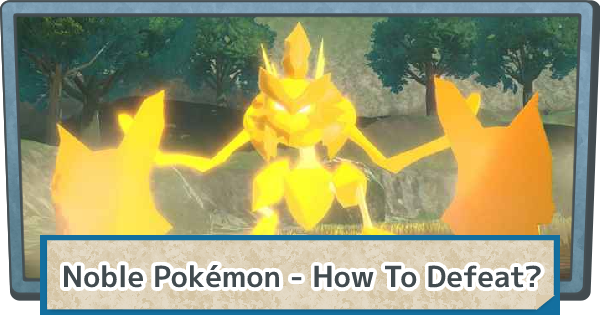 Pokemon Legends Arceus
Noble Pokemon (Bosses): How To Get & How To Defeat

Noble Pokemon Guide for Pokemon Arceus (Pokémon Legends Arceus). Learn more about Noble Pokemon & Wardens, how to defeat & catch boss, and how to use, how to get & balms!

How To Get Noble Pokemon

Noble Pokemon are not catchable in Pokemon Legends Arceus. Players can, however, catch a member of the same species as the Noble Pokemon they like.

How To Defeat Noble Pokemon

To win against a Noble Pokemon, you need to throw balms at them. However, it is not easy to hit them since they constantly move while they are in a frenzy.

When you hit a Noble Pokemon with balms, the frenzy gauge at the top will decrease. You can quell the Pokemon's frenzy by hitting them with enough balms and reducing the frenzy gauge to zero.

Wait For Openings While Dodging

It is important to stay calm when against a Noble Pokemon. First, learn about its attack pattern and dodge accordingly. When you find a good opening, start throwing balms at them.

Battle Them When They Are Stunned

When the Noble Pokemon is stunned, send out your Pokemon to battle them. If you win the battle, their guard will go down and hitting them with balms will decrease their frenzy gauge more.

What Are Noble Pokemon?

Pokemon With A Mysterious Blessing

Watched Over By Wardens

Noble Pokemon are being watched over by special Pokemon trainers called Wardens. They will call on you if the Noble Pokemon they are taking care of goes into a frenzy.

Transforms When In A Frenzy

Some Noble Pokemon will go into a frenzied state. When this happens, they glow brightly and grow larger than normal.