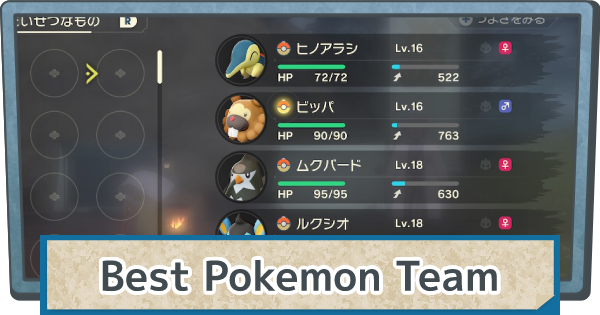 Criteria For The Best Parties In-Game

Separated Based On Timing & Situation

The strongest parties written below are listed according to the progress of the storyline, specific situations (like Leveling) for Pokemon Legends: Arceus. For this reason, Pokemon that are not available at until the story was cleared is not included in the teams mentioned.

Cosidering The Strength Of Each Pokemon

Checking out the stats and moves that can be learned is not enough for choosing the best party. Players also need to consider each Pokemon Type and role for the best party to be used.

This article was written by the strategy team for Pokemon Arceus, a game that does not have competive battles. If you have any suggestions or opinions, please feel free to discuss them in the comments section!

These are the Pokemon you can use for clearing the game. Garchomp itself is stronger than the other Legendary Pokemon, making it the best Pokemon to use without the First Pokemon due to its well-balanced type compatibility.

The strongest party from the end of the game to the final battle. The legendary Pokemon is adopted as an attacker and tank while keeping the highly versatile and strong Garchomp and Togekiss. Hisuian Goodra can be used as a counter to Roserade.

Best Party For Leveling Up

This party is designed for efficient leveling up. Since it is efficient to gain experience by fighting at the Training Center, select two Pokémon with overwhelming power that can sweep the opposing party quickly. You can also choose the Pokemon you want to level up in the free slots.

This lineup is almost solidified with legendary Pokemon. With this party, you will be able to easily defeat all Pokemon with high stats, including Arceus.

The strongest party imaginable without using Legendary Pokemon. Not only does it have a high EV value, but its type compatibility and roles are well balanced, making it easy to deal with any enemy.

Best Pokemon For Clearing The Story

Shinx evolves into an excellent lightning-type Pokemon Luxio, and Starly evolves into Staravia. Both of them are advantageous against most enemy Pokemon in the story. It is highly recommended that you keep these 2 along with your starter Pokemon on your main team.

Best Pokemon At The Beginning

Keep Buizel so that you can have a powerful Pokemon to fight against Steel and Fire type Pokemon for progressing the story.

A well-balanced team with Fire-type Chimchar. This team can help you to easily progress in the game because of the type advantage in the early to middle stage of the game.

This team is flexible since your Pokemon compliments each other in terms of strengths and weaknesses against different types of Pokemon.

A party with Gastrodon and Drapion in addition to the three evolved version of Pokemon from the early-game can help you finish through the mid-game with ease.

Uses the same composition as the Cyndaquil party. Although, Dewott and Gastrodon has overlapping type, the durability of Gastrodon will help you in mid-game or if you are trying to capture a Pokemon.

This party utilizes Monferno to make the fight against grass-type Pokemon a lot easier. This is extremely useful especially during the fight with Hisuan Electrode in the main story.

Garachomp can be used as the first Pokemon on your line-up. Gallade will help you capture legendary Pokemon but it is okay to replace him with other Pokemon in different situations.

Lucario can make the story progression near the end game so much easier. Lucario also has an advantage against other Pokemon that trainers use in the end-game, so it is a good idea to prioritize getting him first.

Having Decidueye and Lucario on the team, makes you vulnerable to fighting types. Use Hisuian Zoroark for his Typing is not affected by Fighting- Type moves which are used by the trainers that you will encounter during the end game. He is also able to learn a move which is useful for capturing other Pokemon.