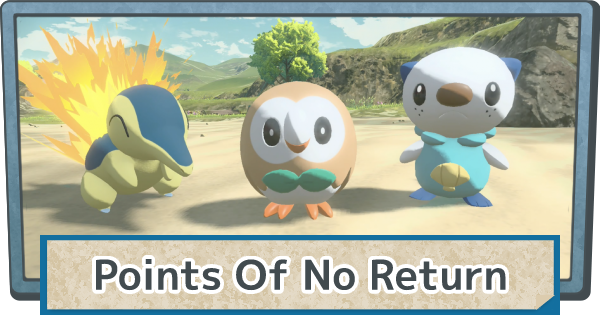 Points Of No Return Overview

Choices That Can Be Made Once

There are choices that can only be made once in Pokemon Legends Arceus. They cannot be changed once you finalized the decision. This guide lists the following points to take note that can be chosen once.

Immediately after the game starts, you will be asked to choose a display language from nine different languages. Note that the game will proceed in the language you choose at this time, and you cannot change it again.

Name And Gender Are Irreversible

In Pokemon Arceus, the trainer's name and gender cannot be changed during the game. Once you decide on a name and gender, you can't change it for the entire game, so be careful when making your first choice.

Some Appearances Can Be Changed

There are some appearances such as hair, eyebrows, eye color, and clothes that can be changed after creating the trainer.

Outfits And Skin: How To Get

At the beginning of the adventure, you'll choose your partner Pokemon from among the three types, but you can't change them later, so choose carefully.

Pokemon To Put In The Origin Ball

At the end of the narrative, there is a moment where you may select between Irida and Adaman. The Pokemon inside the Origin Ball will be determined depending on your decision. When Adaman is chosen, you'll get "Dialga" on a normal Poke ball while "Palkia" is held inside the Origin ball.

The Ball Changes Depending On The Selected Person