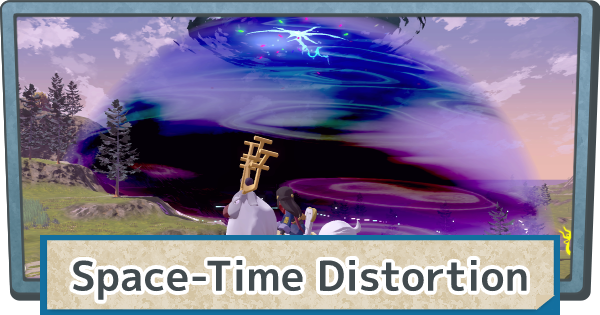 Pokemon Legends Arceus
Space Time Distortion: Pokemon And Items You Can Get

Read about the Pokemon you can catch in the space time distortion, the conditions to activate the distortion, what to do if nothing happens, and Pokemon spawn locations.

* The starter Pokemon will appear after the ending.

* The starter Pokemon will appear after the ending.

It has been confirmed that not only normal Pokemon species appears inside the distortion but also Alpha Pokemon. All of the Pokemon that appears in Time Space distortion can be Alpha.

After Clearing, The Levels Of The Spawning Pokemon Will Increase

After advancing the story and watching the ending, the level of Pokemon that appears in the Space Time Distortion increases to about 60 at once. If your Pokemon isn't growing, prioritize in leveling up first.

Check Out The Main Story Walkthrough!

If You Stay On The Same Map For More Than A Certain Period Of Time, You Will Be Notified

Space Time Distortion occurs randomly when you stay on the same area for a certain period time or longer. On the game screen, when a notification that "Space Time Distortion is like to occur" is displayed, head out to the place where it occurs. Check the notification without talking, walking or fighting, if it does not come out, it is recommended to head back to the village.

Since It Is Displayed On The Map, Head To The Place Of Occurrence

Even if you arrive at the place before the occurrence, the Space Time Distortion Pokemon will not appear, so wait until you receive a new notification that "Space Time Distortion has occurred". It is easy to understand because it has changed to a terrifying dome color after it occurs.

You Can Make A Star Piece With Shards

If you get the star piece recipe that can be purchased from Jubilife Village, you can pick up a large number of shards due to the Space Time Distortion. Pick them up because they are the ingredients for the Star Piece that sells for 5,000p. The recipe can be purchased if you have progressed into the Cobalt Coastlands.

What is Space Time Distortion?

Convenient For Completing Book Tasks In The Early Stages

If you take advantage of the Space Time Distortion, you can fill in the Pokedex tasks that are easier at the early game because you're able to meet and catch Pokemon that you wouldn't normally encounter.

Another Pokemon Spawns At Regular Intervals

The Space Time Distortion Field is populated by Pokemon that spawns at regular intervals, so if you don't have the Pokemon you're looking for, you can look around with a Pokemon Ride.

Appearance Of Money-Making And Evolution Items

Within the Space Time Distortion field, not only Pokemon but also the items that can be found are different. Since you may be able to pick up multiple nuggets that sell at a high price, you can earn more than 20,000p in less than ten minutes.