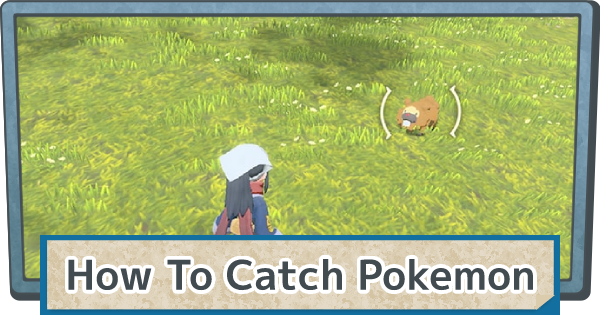 Pokemon Legends Arceus
How To Get & Catch Pokemon

Learn how to catch Pokemon through our Catching Guide in Pokemon Legends: Arceus! Includes how to successfully capture Pokemon, capturing hostile Pokemon, what to avoid, & more!

What To Remember Before Catching Pokemon

Get Closer Without Alerting The Pokemon

▲An exclamation point "!" appears on top of Pokemon if alerted

Players need to get closer within the range of the Pokemon they want to catch, but they might run away if they notice the trainer. Prevent this from happening by approaching it slowly by hiding in the grass or behind a rock so that it won't see you.

Avoid Putting Too Much Pressure On The L Stick

Your walking speed will very depending on how you press and tilt the L Stick. If you put too much pressure on the stick, you might alert the Pokemon to your presence and make it run away from you.

Throw A Pokeball Once In Range

Battle Is Necessary For Hostile Pokemon

Hostile Pokemon will attack the trainer once noticed. If you throw a Pokeball at them, it will be rejected, so try to reduce their health in a Pokemon Battle before attempting to capture them. Players can initiate a battle by throwing the Pokeball containing a partner Pokemon at them.

Once noticed, the wild Pokemon will continue to attack you. The only way to stop is to engage in Pokemon battle or run. Note that the trainer may faint if damage is continuously received with the risk of losing items in possession. It is suggested for trainers to flee and regroup if at a disadvantage.

What Happens When You Die?

Alpha Pokemon are physically different from regular Pokemon in a way that they have bigger bodies and fiery red eyes on the field. Aside from this, they are strong opponents that will aggressively attack and pursue you when you get spotted. There are many ways to up your chances at catching them including lowering their HP gauge to red first by aiming at their type weaknesses. Check out our Alpha Pokemon Guide below for more tips.

How To Successfully Catch Pokemon

Use Bait to Draw Attention

Pokemon baits, such as Berries, can be used by throwing them to distract Pokemon. If you throw the bait while the Pokemon you want to catch is eating it, you can be sure to hit the Pokeball without attracting attention.

Pokemon May Run Away If They Dislike The Bait

If the bait used is not the Pokemon's favorite, it may run away after throwing it. Choose the right bait your target Pokemon likes instead of throwing randomly.

Check The Pokedex For Preferred Food

Throw The Pokeball From Behind

It is easier to catch a Pokemon if you approach it from behind without it noticing you than throwing it from the front. A helpful indicator of whether you can catch a Pokemon or not is the Pokeball symbol that appears above the Pokemon's head. An effective way to do this is to approach slowly from the sides or hide in the grass' shadows and approach from behind the Pokemon.

How To Raise Research Level & Complete The Pokedex

The party gains EXP when a trainer catches a Pokemon, which is the same as defeating them. The good thing about capturing the Pokemon is that the trainer can raise both the party's EXP and Research Points.

Level Up Guide: How To Gain EXP