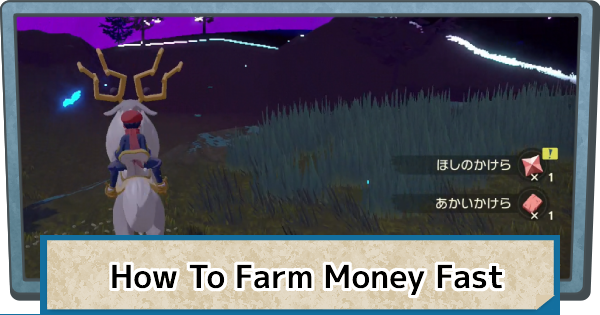 Check out this guide for How To Farm Money Fast for Pokemon Legend: Arceus. The guide includes recommended How to make money, faster way to earn money, money farming, & more!

Battle With The Miss Fortune Bandits

Finish The Game And Reach The End Game Content

The Miss Fortune Bandits will appear before the Post Game, but you'll just receive Nuggets and and not Stardust, which isn't an efficient way of earning money. You'll get Stardust from battling them during the End Game, so finish the game first to farm efficiently.

Head To The Heights Camp In The Obsidian Fieldlands

If you're going to make money with the Miss Fortune Bandits, you need to go to Obsidian Fieldlands. They appear in other maps as well, but in terms of fast movement and time efficiency, the Obsidian Fieldlands is the way to go. The three bandits all appear around the Heights Camp, so go looking for them there.

Of the three Miss Fortune Bandits, Charm & Clover are closest to each other. Therefore, head to Coin first as she is close to the hill base. After that, chase after Charm & Clover.

Each of the Bandits appears randomly in a fixed location on each map. However, they don't appear often, so there's no guarantee that even one of them will appear in one lap. But even so, defeating one will make you earn 40,000, so they are still an effective way of farming for in-game currency. Several of them may pop up in just one lap, so make sure to check all of them for every lap you take.

Location Of The Miss Fortune Bandits

After Checking Head Back To The Village

Once you have checked the locations of all three bandits, return to Jubilife Village. This will reset their locations. You can earn 40,000 coins for each victory, which can make you a lot of money effectively.

Earning Money In The Space-Time Distortion

Search Around The Area

Walk around the map and wait for a notification about the space distortion. In our experience, it usually pops up after around 10 minutes of exploration. It will appear right in the middle of the screen.

A Notification Should Appear

Gather Up Some Rare Items

Enter the space-time distortion and pick up rare items that have fallen to the ground. Depending on your luck, you can pick up items that can fetch a high price that would make it worth about 10,000 to 20,000 yen if you have numerous of the said item.

Some Rare Pokemon Will Also Appear

Within the space-time distortion, rare Pokemon that do not appear in normal fields may appear. The main purpose is money, but if the Pokemon you want appears, it's a good idea to catch it.

If you were able to gather enough materials such as Red Shards, Blue Shards, Green Shards & Stardust, then you'll be able to craft a Star Piece which you can fetch for a high price at shops for around 5,000 coins.

Some Alpha Pokemon usually drop items that you can sell individually or in bulk, we recommend you sell it in bulk that way you'll get more money. If you really don't have the money, sell the items you got from the Alpha Pokemon encounter.