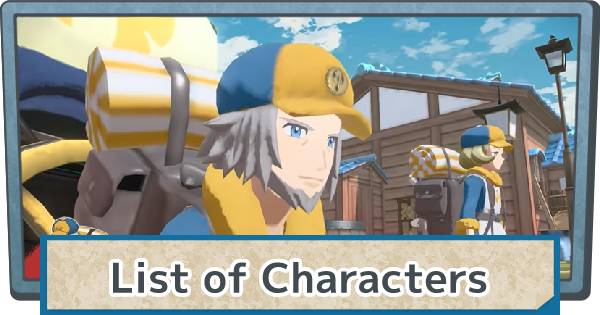 Check out this guide for a list of all characters in Pokemon Legends: Arceus! It includes the new characters, main character names, wardens, ancestors, counterparts, & more.

In this Game, the Ancestors of Existing Characters will Appear

In this game, the ancestors of the characters who have appeared in other Pokemon games will appear. Currently, only Commander Kamado, the ancestor of Dr. Rowan, is officially stated. However, there are many characters such as Mai and Marley, Ginter and Volkner, whose descendants can be predicted from the relationship and appearance of their names.

▲ You can choose the gender of the hero at the beginning of the story.

Professor who came from another region and brought three Pokemon who will be the Hero's first partner.

As a member of the Galaxy Team's Survey Corps, He studies the nature and environment of Pokemons and he wants to complete the Pokedex.

▲ You can choose the gender of the hero at the beginning of the story.

The character who is not chosen will appear in the story as your senior.

The leader of Galaxy Team, He can be rough at times but he is a very reliable leader who is deeply trusted by his team members. Fact, he also likes sumo.

The leader of Galaxy Team's Survey Corps. She is strict both to others and herself. Knowing the hero's qualities, she allows you to take a test and join the Galaxy Team.

The leader of the Diamond Clan and has Leafeon as his partner Pokemon.

He hates waiting and likes to rush without worrying about details. He often quarrels with Irida, the leader of the Pearl Clan, because of their different way of thinking.

The leader of the Pearl Clan and has Glaceon as her partner Pokemon.

As the head of the Pearl Clan, she feels it is important to have courage in conquering the vast land of the Hisui Region. She is very suspicious of you at first but will trust you thanks to the help you provide in quelling the noble Pokemon.

The leader of the Ginkgo Guild.

He might look a little sloppy, but he manages the guild with strong leadership. He sells rare items and special finds from various places.

One of the Ginkgo Guild's Merchants, he is often found wandering in the Hisui Region. Often appears in front of the hero out of nowhere. He has a curious personality and is often interested in rare things and people.

The first warden that the hero meets in the adventure. I take care of a special Wyrdeer that can be found in the "Obsidian Fieldlands". My partner Munchlax and I grew up together as if we were siblings.

The warden who takes care of Kleavor, the lord of the Obsidian Fieldlands. He might be young but given the role of warden because of his proven talent.

He lives by the sea and takes care of Basculegion. He can have a very frail personality but has a kind heart, he is not fond of ghost-type Pokemon.

A warden with a cheerful personality. She feels she needs to have a stronger sense of responsibility than anyone else because of her role. Because of this, she tends to try to solve problems all by herself. She is tasked to take care of a certain lady Pokemon.

Irida reminds me of the female character/hero in sun and moon, might just be me tho.

So, from what I've gathered- Laventon is from Alola. He has a similar dress style to Hapu...but I'm not entirely sure on his relation to her specifically. He does mention Alola close to the beginning of meeting Wyrdeer, bringing up their ride pokemon.