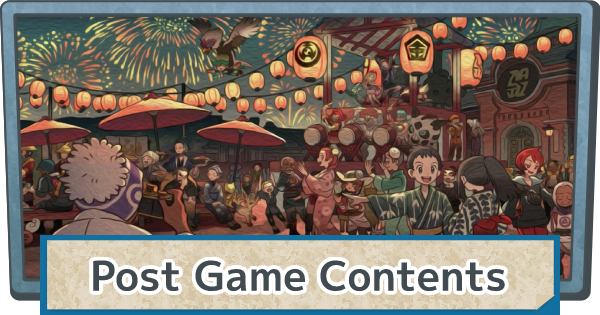 ▲ Volo explains the ruins he discovered.

After finishing the story, a new mission continues. In this mission, the trainer investigates a legendary Pokemon with Volo.

▲ Claiming the Pokemon in the Bulletin Board.

After clearing the main story, the research mission where you can get Darkrai and Shaymin will be unlocked. You can get it from the bulletin board in the lab to the left of the room where Cyllene is.

▲ Trainers can fight in Training Center.

After clearing the game, head to the training area to find Ingo, who also appeared in the story. Talk to him and you'll be able to fight again with trainers you've fought with previously, along with Jubilife security forces.

▲ An example of new sub-mission after the main story.

▲ Trainers can find the new clothes by accessing the Clothier.

Outfits And Skin: How To GetNew Outfits Available

▲ Trainers can battle the Wardens again by speaking to them.

After clearing the story, you can fight the Wardens again in each area. The mode of this battle is time-bound and trainers can challenge them repeatedly. Trainers will also receive a Rare Candy as a reward for defeating them.

Obtain The Other First Pokemon

▲ Trainers can receive the other Pokemon by speaking to Professor Laventon.

After clearing the main story, trainers can receive the other First Pokemon by speaking to Professor Laventon in the lab to the left of the room where Cyllene is. After receiving the Pokemon, try to complete the Pokedex.

▲ The image above shows the Pokedex info.

After the credits, you'll see a black background with the line, "Meet all the Pokémon". Collecting the Pokedex may lead to the occurrence of new events or obtaining key items.

Get The Shiny Charm When Research Level 10 Is Reached

The Shiny Charm can be obtained by reaching Reseach Level 10 on the Pokedex. Once you've reached Level 10, report to Professor Laventon in the Galaxy Hall to get it.

Research Tasks: How To Raise Research Level And Points

▲ The image above shows the list of Sub-Missions available & completed.

Aside from main missions, there are Sub-Missions requested by villagers. If you are aiming to complete all the Sub-Missions, try to finish some requests to unlock the next one.

▲ The image above shows the list of Main Missions available & completed.

Main Missions will continue despite clearing the story. Try to use this chance to complete the remaining missions after the story.

▲ The image above shows Shiny Psyduck.

Shiny Pokemon also appears in this game, and this is most likely the trainers' final challenge. You can still play the game with the goal to capture Shiny Pokemon.

Raise All The Effort Levels

▲ Effort Level are the numbers beside the stats

Trainers tend to max out Pokemon stats in the game. But obtaining items to increase each Pokemon's Effort level tends to be time-consuming, making the goal to raise all stats challenging

How To Raise Effort Level

▲ The image above shows the list of Unknowns captured.

Trainers can unlock Unknown's Pokedex during the story, but this can also be completed after. If done completing the other missions, try to take the challenge to complete this task.