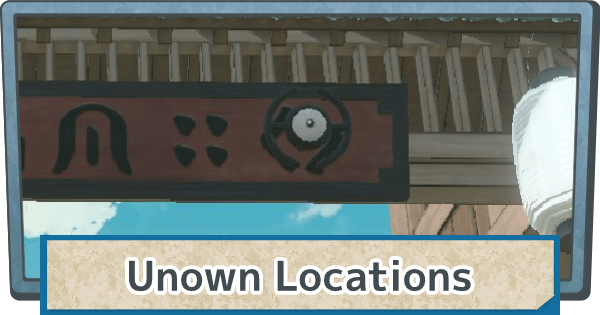 Unown Locations Checker: How To Catch Unown in Pokemon Legends: Arceus? Includes Unown location, text, letters, maps, list, notes, how to catch, where to find and so much more!

※Tap the image to zoom in.

Unown O's Location Is Inside The Hole

You can use the hole on the southwest side of the map to enter the cave where you can find Unown (O) is.

How To Catch Unown

To catch an Unown, simply throw a normal Pokeball. It will not run away even if you miss your ball or if you approach it carelessly.

You will need to use a Feather Ball to catch the two Unowns above. Since normal Pokeballs will not be able to reach high places, it is best that you prepare at least two Feather Balls for these situations.

※ Check out the notes from Pokedex as hints on where to locate all Unown.
※You can alsothe location checker above if the notes are unclear. ▲Unown Location Checker

Reference For The All Unown Letter

All Unown are in the form of the alphabet, and the notes at the bottom of the survey memo can be read as a hint by replacing it with the alphabet. See below for ciphers and answers.

▲The only thing that you will get for completing this task is the Achievement and some points to reach maximum level.

Even if you are able to complete all 28 Unown for research, you will not receive any reward for this. Even though it is a completion task, there is almost no benefit to this, you do not need to collect them immediately.

After you capture all 28 Unowns, the horde will appear at Solaceon Ruins in Crimson Mirelands. About 4 to 5 Unowns in every 28 letters will appear on the ruins, so if you are looking for a special Unown, this is the place you should consider checking out!

Solacion Ruins are located near the Mireland Camp in Crimson Mirelands, you can fly straight to the ruins to access them faster.

Shiny And Alpha Pokemon Can Also Be Found

Shiny & Alpha Pokemon can also be found in Solacion Ruins. but since the area inside the ruins is dark, you cannot tell at first glance that the specific Pokemon Is a Shiny one, so try to take a closer look first as they won't run away immediately unless you tried to capture them.