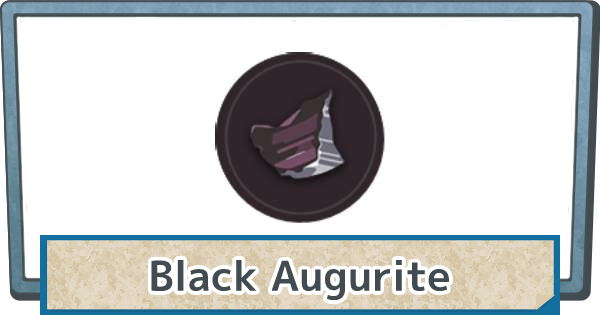 Pokemon Legends Arceus
Black Augurite: How To Get And Location

Black Augurite - How To Get And Location

Obtained From Side Quest

Black Augurite can be obtained as a reward for this request. Nosepass is required to clear this, so if you catch it in advance, clearing will be quick.

▶A Nosepass To Guide The Way: Request 68

Chances To Obtain By Digging

It is recommended to dig for items to obtain Black Augurite, which can be done by riding Ursaluna. Doing this may increase your chance of obtaining evolution items, which can be used to evolve other Pokemon.

Evolution Stones: How To Get

★ Nosepass appears only for the first time. Random from the second time onwards.

Black Augurite can also be obtained by defeating or capturing Graveler. They mostly appear when you use a Pokemon to a shaking rock, so don't forget to interact if you see one.

Graveler: How To Get And Evolution

Used To Evolve Scyther To Kleavor

Evolve Kleavor To Be Registered In Pokedex

Black Augurite is an item used to evolve Scyther to Kleavor, which is a newly added Pokemon in the Hisui region. The main objective of the game is to complete the Pokedex, so try to have at least 1 Black Augurite to obtain Kleavor.

You can pick up items with high prices and evolution items, including evolution stones at the Space-Time Distortion. This occurs at random after you progress through the story and unlock the Crimson Mirelands. You can also catch Pokemon that don't appear frequently on the map. Use the chance to go to a Space-Time Distortion if one appears.

Space Time Distortion: Pokemon And Items You Can Get