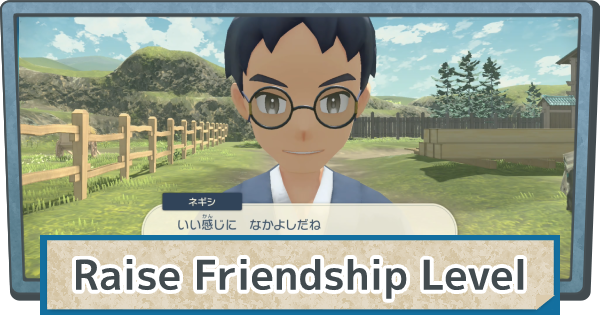 A guide on how to raise, increase, and check the friendship levels (happiness) in Pokemon Legends: Arceus! Guide includes a friendship level checker & list of evolution conditions.

How To Raise Friendship Level?

How To Confirm The Increase In Friendship

Bring It With You On Adventures

▲ You can change your Pokemon on-hand at the Jubilife Village

The more you go on adventures with certain Pokemon, the more you will become familiar with them. In previous Pokemon games, friendship was raised by the conditions such as the number of steps, level up, and battle with some trainers, but in this game, just remember that to increase Pokemon friendship, make sure the Pokemon is on-hand.

Release It From Its Ball To Collect Items

If you throw a Pokemon ball at a tree or an ore to release your Pokemon to collect or mine items, the friendship level with that Pokemon will increase more efficiently than a Pokemon that you just keep on hand.

A Pokemon that faints will have a decrease in friendship level, so prevent it from fainting to substantially increase its friendship level. With that said, be careful not to let your Pokemon faint if you want to increase their attachment.

Be Careful Not To Use Remedy For Recovery

*If you're prioritizing efficiency, you can do with doing just the above 3 ways. However, if you can afford to spend a bit more time on this, you can also do the following tips.

Get The Pokemon Out Of The Ball And Interact

Use Items On The Pokemon

Like in the Pokemon game series, the friendship level increases when using training items such as experience candies and point-ups combat items.

How To Check The Friendship Level

Check By Speaking To Belamy After Clearing Quest

You can talk to Belamy after defeating the Noble Pokemon in the Main Mission, The Frenzy of the Lord Of The Woods. Compatibility with Pokemon can be confirmed by talking to Belamy near the Jubilife Village. However, it cannot be used unless you clear the Request 28: Measuring Your Compatibility given by Belamy.

There Are 4 Levels Of Friendship

※Only those whose evolution conditions have been verified are listed.
※Will be updated regularly.

Earning High Level Of Friendship During A Specific Time

Evolve During The Day