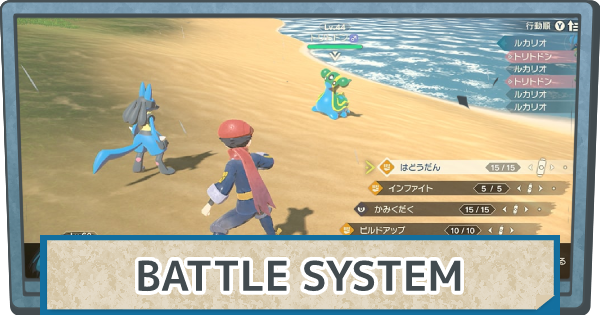 "Pokemon Legends Arceus" allows you to observe wild Pokemon from a distance and provides you an option to catch them without necessarily battling them. When targeting certain wild Pokemon, you'll see a Poke Ball symbol appearing beside. This method was previously introduced to Pokemon Sword Shields as well.

Throw your Poke Ball containing your own Pokemon near a wild Pokemon to start a fight. Your Pokemon will then appear, and the combat will begin without a hitch.

The battle system in the Pokemon series are turn-based, but in Pokemon Legends Arceus, players are able to gain additional turns with their chosen battle style. This ultimately determines the flow, allowing some Pokemon to attack several times in a row with Agile Style and some techniques. Use this new system to capture or defeat Pokemon with ease.

Agile Style & Strong Style - How To Use & Effects

In the same manner as the previous Pokemon series, you can battle other people, specifically Wardens that is considered the early counterparts for the Gym Leaders in the modern age. These individuals have developed their ties with some Pokemon and has the vital task to protect the Noble Pokemon. Wardens also have the ability to challenge you in the game should you cross their paths.

▲ A Ball Mark Will Be The Guide

When initiating a battle, throwing your Pokemon from behind the wild Pokemon will allow you to attack first. If you strategize the sequence of your actions at the start, you can quickly move the fight in your favor by executing two consecutive moves. Look for the ball icon that appears overhead - this mark means you are behind the Pokemon.

Can't Use This Technique On Special Pokemon

When facing special Pokemon such as Alpha Pokemon, it's not possible to attack first if the ball icon does not show. Keep this in mind when battling a Special Pokemon.

In this game,you can use two battling techniques: Agile Style and Strong Style. Both have benefits and weaknesses, thus the secret to victory is to employ them appropriately in each scenario.

Agile Style has the feature of having a faster order of activities, but the damage of each move is lowered. Use it when it's advantageous to act continually, such as when you want to weaken a wild Pokemon before catching it, or when you want to attack after applying an ability-enhancing technique.

Strong Style movements take longer to execute but have a greater effect on each attack. It is recommended to use it when you want to burst down your target with a single attack.

Through your journey you'll be able to encounter some hostile Pokemon among the usual wild Pokemon and they will aggressively attack your character. If you are continually attacked by Pokemon, you might potentially get knocked out in the process. You can either use your Pokemon and battle it, or flee until you can't be targeted anymore. It will be up to you how you will counter them.

Penalty For Getting Knocked Out

When you get knocked out, you are instantly revived back to the camp.You'll also lose some of the items you have acquired so far. So in order to prevent losing some valuable items as well as saving time, keep track of your HP and prevent your character from getting severely damaged.

Alpha Pokemon are huge and have fiery red eyes that glow in the dark. It's tougher than normal wild Pokemon, and it will attack you as soon as you get discover it. So make sure that you have a battle plan before approaching one. If you catch one, it will become a valuable addition to your Pokemon team, and if you vanquish it, you may obtain a rare item.

Certain Pokemon have received a mysterious blessing that separates them from other wild Pokemon and are considered "Lords and Ladies" by some. These Noble Pokemon are friendly and eager to work with trainers. Others, on the other hand, are significantly more aggressive and may attack on sight. Many Noble Pokemon have been undergoing a frenzy due to a strange phenomenon. You will need to throw them Forest Balms to avoid attacks and help them get out of their current state.

Take A Chance And Battle Them!

To engage in combat with a Noble Pokemon, simply toss a monster ball in the same manner as you would in normal battles. If you win the Pokemon Battle, your opponent's stance will change - giving you an opening to hit it with balms to calm them down.

Capture Pokemon Without Engaging In Battle

In this game, you can throw a monster ball at a wild Pokemon without having to battle it. Aiming is required of course! You can target it from a distance and if the Pokemon does not pop out from the ball, it means you have successfully captured it. This makes catching Pokemon easier!

Hide In Nearby Grass Or Boulder

Some Pokemon flee as soon as they spot you, therefore it's best to approach while hidden in the grass or behind a rock. Furthermore, if you approach slowly without sprinting, it will be difficult for them to notice you getting near.

Weakened Pokemon Are Easier To Catch

Similar to the previous Pokemon series, it will be easier to catch wild Pokemon if you weaken them or put it them in odd situations in combat. Furthermore, you can opt to catch aggressive Pokemon that will attack you during your journey after entering the battle with them. This way you can collect Pokemon and expand your Pokedex much faster!

Heavy Balls are a type of Poke Ball that is more successful at capturing Pokemon that haven't noticed you yet. Because they're heavier than conventional Poke Balls, they don't go very far when you throw them, so make sure you sneak up on a Pokemon before using one to ensure it hits them!

When tossed, these balls create a cloud of smoke within the are of effect. This smokescreen reduces visibility and prevents wild Pokemon from spotting you. This allows you to approach wild Pokemon and catch them.