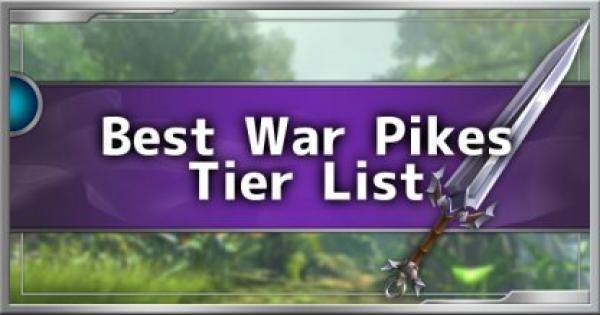 Read this Dauntless guide & tier list to know which are the best War Pikes in the game. Find out the top ranking hammer to use and more!

These weapons were chosen and ranked according to their usability & effectiveness in hunting Behemoths in Dauntless, including ease of use, skill required, and end game viability. Each weapon's unique capabilities were also taken into consideration when they were chosen.

The Inferno's Arrow is one of the best War Pikes when it comes to firepower. With +3 Overpower and 2 power Cell slots, it is very capable of downing Behemoths quickly.Check Out Inferno's Arrow Weapon Stats!

With Inferno's Arrow, the 8th successful hit with the weapon will have extra raw and Blaze damage. This is great for Slayers who know how to use the War Pike and can connect hits continuously.

With its innate +3 Overpower, the Inferno's Arrow buffs up the War Pike's damage against staggered Behemoths. This is extremely useful for quick hunts in multiplayer mode.

Has 2 Power Slots For Extra Attack

Inferno's Arrow comes with 2 slots for power Cells. Slayers can instantly max out any power Perk with this weapon, making it easier to build a complimentary loadout.

A milder version of the Inferno's Arrow, Ember Pike also focuses on damage-dealing while slightly countering the War Pike's weakness of immobility with its technique & agility cells,

The 7th successful hit that you do with the Ember Pike will have additional Wound damage. Wounding Behemoths make it easier for your teammates to inflict damage on that specific Behemoth part.

The Ember Pike comes with a +3 Evasive Fury Perk, giving you an attack speed buff when you dodge through a Behemoth attack. This is a great compliment to an already fast-hitting War Pike, further increasing your DPS.

Has Technique & Agility Slots For Flexibility

The Ember Pike comes with 1 technique and 1 agility Cell slot. This provides Slayers with flexible options for their Perks where they can counteract the War Pike's heavy use of Stamina and lack of mobility.

The Spire of Dawn is a powerful War Pike that has +3 Cunning with technique and power slots. It focuses on dealing damage but can be flexible, given its variation in Cell slots.

The Spire of Dawn has a bonus trait that gives every attack a 10% chance to hit twice. This increases your chance to deal more damage in every hunt.

The Cunning is a useful Perk that can increase your chances of doing critical hits. This doubles the damage you deal per hit and is a great Perk to have for a War Pike that deals a lot of hits in a short amount of time.

The Gyre of Night is another War Pike that has +3 Cunning built into it, increasing your chance of your hits dealing double damage. It also has technique & utility Cell slots for experimental or supporting builds.

With the Gyre of Night equipped, Slayers at lower health will deal more damage with every hit. This is a double-edged trait and Slayers should use this weapon only if they've mastered the weapon's combos & Behemoth movement.

The Gyre of Night has +3 Cunning as its bonus Perk, upping the chances of your hits doing critical damage. This is very effective for the War Pike which can produce many hits in a few seconds.

The Nayzaga's Fang has built in +3 Barbed and the bonus trait of doing Lifesteal on Wounded Behemoth parts. It also comes with technique & utility Cell slots for flexible loadouts.

When you hit a Behemoth's Wounded part, you'll do 5% Lifesteal to recover your HP bar. Though the percentage is not high, this is nice to have when you've run out of pots or Aether vents.

Wound Damage Per Hit With +3 Barbed

The Nayzaga's Fang's bonus Perk is +3 Barbed which does bonus Wound damage per hit. Combined with the War Pike's piercing attacks that can also Wound, you'll have higher chances to Wound Behemoth parts.

The Nayzaga's Fang comes with 1 slot each for technique & utility Cells. This is great for Slayers who prefer the flexibility of different Cell slots, allowing them to create unique builds for their own style of playing.

One of the rarest unique weapons in Dauntless, The Godhand is a powerful War Pike that does increasing continuous damage with its special beam attack.

Check Out How To Unlock Exotic Weapons!