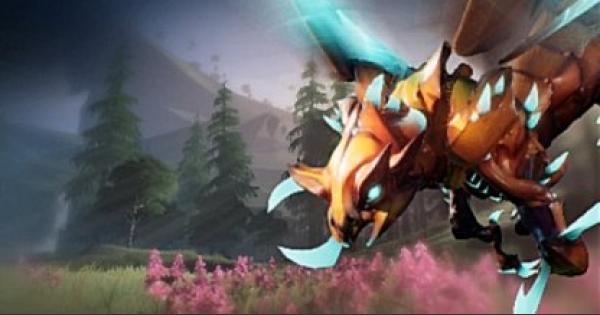 Check this Dauntless guide on the weaknesses of the Behemoth - Kharabak. Find out useful skills to counter its attacks and how to beat, interrupt, and boop the Behemoth!

The Kharabak is one of the fastest moving Behemoths in Dauntless. With Terra as its element, it does dangerous Wounding attacks with its front slicers and will turn invisible when Aether-charged.

The Razorwing Kharabak is a faster and more dangerous version of the Kharabak. When it turns invisible, it teleports to another spot then swiftly charges towards Slayers.

When fighting the Heroic Razorwing Kharabak, it receives a buff called Jagged, making all its moves that inflict Wound status to inflict Crippling Wound status instead. This reduces your maximum stamina by 40% on top of the Wound status effect.

You'll lessen the damage you take from the Kharabak by equipping Terra armor. If you want to deal more elemental damage, bring your strongest Shock weapon.

If you're hit by the Kharabak's slicers, you'll get the Wounded status effect. You can shorten the duration of this status effect by equipping the Bloodless Perk or Cell.

Heal To Do Away With Wounded Status

If you don't have any Bloodless Perks or Cells, you can just heal when you're Wounded as this will immediately remove the status effect.

Does Deadly Attacks With Front Slicers

The Kharabak's main attacks are from its deadly front slicers. It glides on the ground and swings it slicers, Wounding any Slayers in its path. Dodge to keep yourself safe.

The Kharabak will also occasionally throw 2 air slices consecutively in front of it. The best way to avoid these attacks is to dodge away right before they hit you.

When the Kharabak is Aether-charged, it will turn invisible and continue to do its dangerous charge & slicing attacks. Keep track of the Kharabak so it won't catch you off-guard with its painful hits.

Grows Feathers On Claws When Aether-Charged

The Kharabak becomes more aggressive when it is Aether-charged. You'll know it's in this phase when it flies up and grows 3 feather-like things on its claws.

When the Behemoth turns invisible, you can see a faint see-through silhouette of the Kharabak. This makes it easier to find it in the field as it is not completely invisible.

Does Spinning Body Slam Onto Ground

When the Kharabak suddenly flies up and stays there for a second, it will spin and slam its body heavily onto the ground, dealing a small AoE damage upon impact.

Kharabak Gets Stuck To The Ground

When it performs this attack, it gets its claws stuck on the ground for a few seconds so it's open for your attacks.

Summons Small Insects Around Its Body

The Kharabak will summon smaller insects to fly around its body and swarm you when you go near it. It will be vulnerable during this attack, so keep attacking while it summons its swarm.

Hit Teammates To Get Rid of Their Swarm

Boop When Forward-Charging With One Claw On Ground

You can boop the Kharabak when it charges forward and drags one claw on the ground. However, booping this Behemoth needs timing and practice as it moves very fast and can be hard to track.

Flies Up Before Charging Forward

The Kharabak will be readying its charge move when it suddenly moves away then flies up. When you see this happen, get ready to use a heavy attack to interrupt it.

Razorback Kharabak can turn invisible for a moment, teleport and charge at a Slayer even when not Aether charged. This is a very dangerous move that can easily bring down your HP bar so beware of where it pops out and dodge when it attacks you.