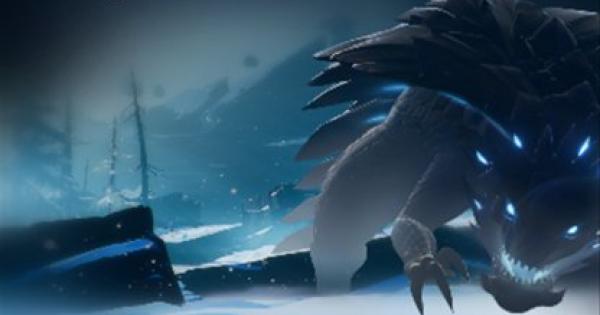 Check this Dauntless guide on the weaknesses of the Behemoth - Pangar. Find out useful skills to counter its attacks and how to beat, interrupt, and boop the Behemoth!

Uses Its Length To Its Advantage

The Pangar uses its long body to great advantage with its dangerous tail sweeps & a heavily damaging roll attack, which can take out Slayers within mid range. Cutting its tail should be a priority and Slayers should close the distance when attacking.

Encases Itself In Ice When Aether-charged

The Pangar can encase itself in ice armor when it is Aether-charged, which also increases its damage on Slayers so watch out for its attacks.

The Frostback Pangar can freeze Slayers in place with its breath attack. Dodge this as much as possible since getting frozen will open you up to the Frostback variant's higher damaging attacks.

What makes the Heroic encounter much more challenging is that the Pangar's attacks are followed by ice spikes that shoot up from the ground. Anyone hit by these ice spikes are immediately frozen.

The Pangar as with other Frost Behemoths are weak against Blaze Weapons. Frost Armor also offers added protection against the Pangar. You can run your own builds as well, but do consider that you'll also take more damage when you're wearing Blaze armor.

To make the hunt easier, equipping Cells such as Sharpened and Weighted Strikes will increase your Wound and Part Damage. This allows you to quickly take out its tail, which will disable its tail swipe.

Overpower For More Damage When Down

Overpower improves damage on staggered Behemoths, and that includes the interrupted state. This Behemoth uses its roll attack frequently which can be interrupted easily, giving you more opportunity to damage it while interrupted.

When Slayers are in mid range, the Pangar will slightly move towards one side and raise its tail, then fling its tail to deal damage on nearby Slayers. It's best to attack the Pangar from beneath to force it to use stomps instead which are easier to dodge.

The Pangar will hop and do a single forward roll, damaging all players in front of it. This move is hard to telegraph so attack from the front with caution.

Unlike the quick forward roll, the Pangar will not hop, and will continue to roll until it hits a wall or interrupted. It will do a really quick wind up by moving its body back a little bit before the roll. This move is interruptible / boopable with a heavy attack directly from the front.

The Pangar will lower its head, charging towards Slayers in front of it. This one is hard to telegraph as well as the movements are very subtle. Watch out when it retreats or sightly steps back which should signal this attack.

When Slayers are underneath the Pangar, it will use its feet by to shove away Slayers. It can either stomp, or do a single kick towards the back.

The Frostback variant will kick with both of its legs twice instead of just a single kick.

This attack freezes any slayer caught by the freezing breath. Other slayers must attack a frozen slayer, or the frozen slayer should mash its dodge button rapidly to escape. This attack hits wide, so focus on dodging towards the side of the Pangar to avoid this attack.

The Heroic Frostback Pangar's attacks are almost always followed up by ice spikes that erupt from the ground. These can freeze Slayers in place, opening you to the Pangar's devastating attacks.