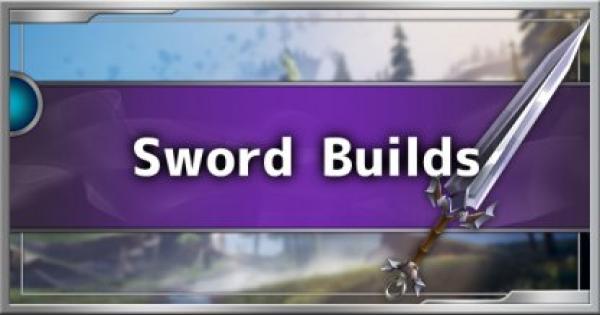 Check out this Dauntless guide on how to build for the weapon - Sword! Includes exotic & lifesteal build guides, overview of each build, & more!

The Sword is an iconic weapon in Dauntless - very flexible in attack power and speed. It has excellent cutting power, perfect for cutting Behemoth tails and breaking parts.

The Sword has the capability to boop or interrupt certain Behemoth moves with its heavy attack. This makes it a useful weapon to learn when fighting solo and great for damage in multiplayer.

Needs To Be In Close-Range To Attack & Fill Meter

The Sword has a meter you need to charge in order to use your special skills but you need to be in close-range of the Behemoth to actually hit them.

This build supplements the Sword's capabilities in severing monster parts such as tails. Bladestorm and Sharpened amp up part-breaking damage while Evasive Fury will increase the Sword's attack speed.

Bladestorm does extra part damage in every hit and amps this up extremely when you dodge after an attack. Sharpened complements this by adding more part damage per hit.

With Ragehunter activated, your attack power will increase against enraged Behemoths. This is a perfect match with part-breaking damage as you'll hit the Behemoth harder when it's enraged.

The Hunger is an Exotic Sword that has a special Perk called Feast. You take damage over time in exchange for increase attack power, speed, & lifesteal. This build helps offset that, giving you tankier HP and buffing your attack speed & power.

The Tough Perk instantly adds 500 to your HP bar, allowing you to survive the dangers of The Hunger's Feast. It also increases the amount of healing you get from different sources such as pots or Aetheric vents.

Overpower will add more damage per hit when the Behemoth is staggered while Cunning increases your chance of landing critical hits. You deal more damage and make the hunt faster, allowing you to survive while wielding The Hunger.

When you have Energized equipped, you'll fill up your Sword meter much faster, allowing you to activate your special very quickly & often in the hunt. This will help you do more damage and hunt the Behemoth faster.

When using the Hold ability of your Lantern, you'll activate the Conduit Perk. This increases your attack speed and those of Slayers around you for a short period. Make sure to activate your Lantern when the Behemoth is down or stationary.

This build utilizes easy to acquire items, mostly from Boreus and Gnasher, which are one of the few Behemoths that you face early game. The only challenging bit here is acquiring the Hellion helmet.

Iceborne, Rage and Wild Frenzy synergize well as they give various buffs when a Slayer is low health. These become more viable perks to have at the end-game when Behemoths start to hit harder.

Core Perks Must Be Allocated On Armor

Iceborne, Rage, and Wild Frenzy which are the main requirements for this build must be allocated on armor pieces, so it's easier to swap out weapons.

A maxed out Tough Perk adds 500 to your HP bar, giving you a bigger health pool, while improving healing from all sources which also works well with Iceborne!

Has Neutral Resistance Against Behemoths

The Hellplate Casque and the Boreal March's resistances will cancel each other out, maintaining neutral resistance against all Behemoth types.

Hey, do you update builds?