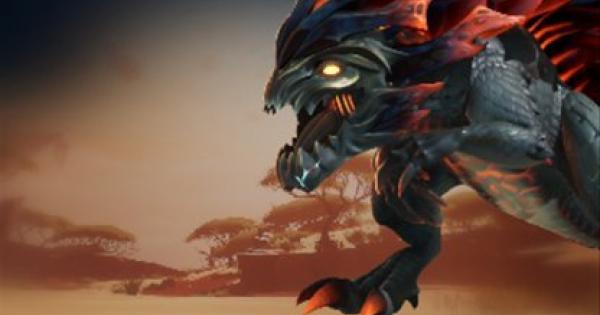 Check out this Dauntless guide on the weaknesses of the Behemoth - Hellion. Find out useful skills to counter its attacks and how to beat, interrupt, and boop the Behemoth!

The Hellion has several attacks that can reach over a wide range in its arsenal, making it a difficult Behemoth to get close to. Keep your attacks to a minimum in order to avoid getting stuck in an animation when it decides to attack.

The Scorchstone Hellion's lava patches will spawn new lava blobs on them. This can be avoided by absorbing Molten Heart Charges to negate the fire damage you receive if you walk over them.

It is recommended to equip Blaze Armor pieces to lessen the fire damage that the Hellion can do to you. Your weapon should be a Frost weapon in order to deal bonus damage to the Hellion!

The Molten Perk allows you to spawn and collect Molten Hearts. When you collect a Molten Heart, you will be granted a brief invincibility to fire, and bonus attack and movement speed!

If you are On Fire, simply pick up a Molten Heart to remove the On Fire status, and become immune to any Blaze damage.

You will be dodging several times during the fight due to the Hellion's multiple AoE attacks. Equipping Evasive Fury will temporarily increase your attack speed, allowing you to get more hits in after dodging through one of its massive attacks

The Hellion will lower its head and start charging forward in a shoulder tackle. This attack has a long range, but can easily avoided by rolling to the side.

The Hellion will also try to clear Slayers at its feet by stomping or kicking Slayers away. Since this attack is telegraphed by the Hellion raising its legs, this attack can be evaded by only hitting a few times, then dodging away.

The Hellion's stomps will cause lava to erupt from the ground when the Hellion is Aether-charged. Hitting its scales in this state will spawn Molten Hearts which you can absorb to avoid Fire damage.

The Hellion swipes its tail twice against Slayers, dealing huge damage to those that it hits. Slayers can lower this attack's effectiveness & range by severing the Hellion's tail.

Burrows Into The Ground

The Hellion will burrow into the ground. A few moments later, a crater will appear, showing where it will pop up next. Be ready to dodge since the Hellion will jump out and slam the ground with its body!

Be sure not to dodge towards the crater where the Hellion emerges since it spews lava when the Hellion erupts. If you do not have a Fireproof Perk or Molten Heart absorbed, it is best to dodge away.

Spews Lava From Its Mouth

Every now and then, the Hellion will spew lava from its mouth as it retreats which causes On Fire status, inflicting damage over time on anyone that steps on it. However if you have Molten, you'll be immune to any damage, and the spew itself doesn't directly cause damage.

This Behemoth will jump up in the air and either land flat on the ground or on its side. When it does this move, the Hellion will be temporarily vulnerable to a flurry of attacks from the Slayer team.

Can Be Knocked Down By Breaking Legs

There is currently no other way to boop the Hellion, but breaking any of its parts or staggering them will cause it to stumble on its side. This gives you and your team a lot of time to get a few good hits in before it stands up again.