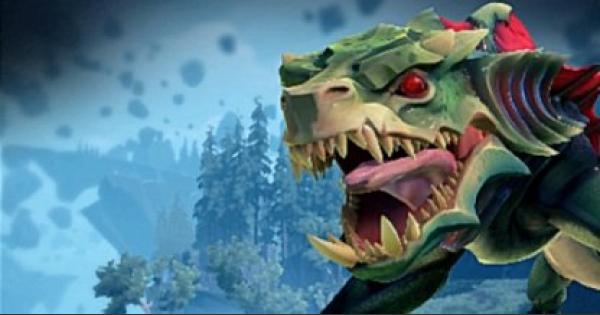 Check this Dauntless guide on the weaknesses of the Behemoth - Drask. Find out useful skills to counter its attacks and how to beat, interrupt, and boop the Behemoth!

Shoots Lightning Lasers From Its Mouth

The Drask is a tough-skinned Behemoth that deals Shock elemental damage. It can shoot lightning lasers from its mouth, dealing big damage to any Slayer that comes unprepared.

As of the moment, the Dire variant of the Drask, the Thunderdeep Drask, is not part of the current list of Behemoths in Dauntless. More information will be confirmed once the Behemoth is found in the game.

The Drask is a Shock Behemoth and will be weak against a Terra element weapon. To protect yourself from its elemental attacks, equip Shock armor to build up your resistance.

Use Insulated Cell To Lessen Duration Of Shocked Status

The Insulated Cell shortens the duration of the Shocked status if the Drask is able to hit you with its lightning attacks. With this Cell, you'll be able to use Consumables sooner, allowing you to heal up in dire situations.

The Drask can shoot out a heavy-hitting lightning laser attack from its mouth. When you see its mouth area start to crackle with yellow light, dodge to avoid taking damage or getting inflicted with the Shocked status.

When the Drask is enraged, it shoots 3 consecutive lasers instead of just one. The best way to avoid getting hit is to dodge out of the way until the attack is over.

Fighting the Drask can be a challenge because the hit box of its tail is very large. It spins around and can hit you twice with this move, so be sure to dodge twice to avoid getting hit. Always focus on cutting the tail first to make the fight much easier.

No Specific Move To Boop Or Interrupt

Fighting the Drask is also a challenge because you won't be able to boop or interrupt any of its moves. The best you can do is dodge and avoid the attacks to prevent your HP bar from going down.

Aim For Head With Hammer To Stagger

You can equip a Terra Hammer and aim for the Drask's head for a chance to stagger it. This is the only known way to stagger the Drask.