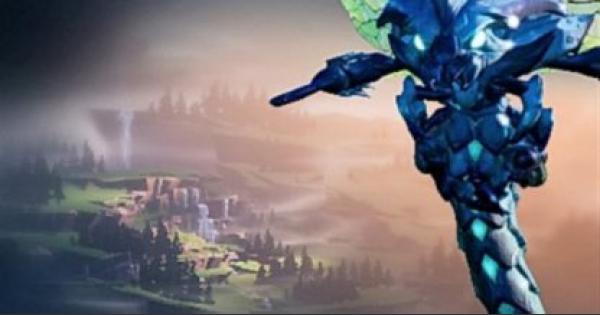 Check this Dauntless guide on the weaknesses of the Behemoth - Rezakiri. Find out useful skills to counter its attacks and how to beat, interrupt, and boop the Behemoth!

The Rezakiri is one of the last Behemoths you'll fight in Dauntless. It is a flying insect-type that deals Radiant elemental damage with its far-reaching & deadly laser light attacks.

Can Only Be Fought In Heroic Difficulty

With a Threat Level of 17, the Rezakiri is an end-game Behemoth that can only be fought in Heroic difficulty. Slayers should approach this fight with caution and should not fight it alone.

Can Only Self-Revive Once

In the fight with Rezakiri, you can only revive yourself once in the entire hunt, including the Heroic+ difficulty. However, you'll be able to revive your teammates and you can be revived by them as many times as long as the Threat Level isn't maxed out.

The Rezakiri is a Radiant Behemoth and therefore weak to the Umbral element. Bring Umbral weapons to deal more elemental damage and be sure to wear Radiant armor to increase your resistance to its elemental attacks.

When the Rezakiri gets enraged, it'll do a move that will encase Slayers in a glass dome. This makes them vulnerable to the Rezakiri's wide-ranged laser ball & beam attacks.

Slayers should focus on breaking the glass dome first to prevent them from taking too much damage from Rezakiri's attacks. With the glass dome broken, Slayer movement in the field will not be restricted anymore.

Dodge Or Sprint Towards Rezakiri To Avoid Damage

When Rezakiri summons light balls in the ground, it's best to just dodge your way though them. When the light balls form in the air, sprint towards Rezakiri to avoid the cone of damage it can do.

The Rezakiri will also send out laser beam attacks towards you. One will be sent forward from the Rezakiri and will be one giant beam while the other laser attack will be several (4 or 8) beams that will shoot out from under the Rezakiri when it flies up into the air.

Move Through Gaps Or Dodge Through Lasers

When the Rezakiri shoots lasers forward, it's best to dodge through them as there is no safe space. When it shoots laser beams from the air, move through the gaps to avoid taking damage.

After the Rezakiri shoots lasers from underneath it, it'll slam its body onto the ground. This is a good chance to hit and break its body parts.

No Boop Or Interrupt In This Fight

The Rezakiri has no known boop or attack interruption, making it a challenging fight reliant on your Slayer skills. Keep dodging its attacks and look for openings to break parts & stagger the Behemoth. This brings it down to the ground, open for your attacks.

Can we have a fix for Rezakiri, please? it's hard to get its Exoskeletal Plates as the requirements are to break its legs but it flies too often to even target them and I think we've broken them several times but no drops from them.

I wish we could break its long tail off as the range of its spinning tail attack is annoying, it's one of the very few Behemoths that you can't remove the tails from.