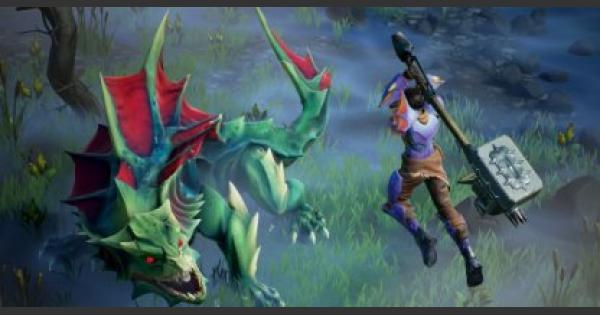 Learn all you need to know in mastering the Hammer in this tutorial; including combos, play tips, weapon mechanics, recommended Hammer & more!

What the Hammer lacks in speed is greatly made up for by its raw damage. The hammer is one of the heaviest hitters among the weapon classes, and is great for staggering Behemoths. Hitting Behemoth heads will be your priority as a Hammer wielder.

Has A Close Range Blast for Interrupting

The Hammer in Dauntless is not a traditional hammer. You can load up ammo into the weapon and fire it at close range to disrupt Behemoths when Concussive Salvo is equipped. You can also use Evasive Blast to interrupt and at the same time evade an attack.

Check Out How To Boop Here!

Blasts Can Be Used For Movement

A loaded Hammer can also be used to maneuver around and perform evasive actions, such as a Hammer Jump and Double Jump. These moves consume stamina and ammo.

Unfortunately, as a blunt weapon, the hammer cannot cut off Behemoth tusks and tails. However, it can still build up part damage on these parts for other members of the party to cut off.

Skarn's Vengeance has +3 Knockout King which increases your Stagger damage - one of the most important uses of the Hammer. It also has a power slot, allowing you to +6 your Knockout King or add another useful power Cell.

The Skarn's Vengeance has a unique ability to generate a stackable shield based on the amount of damage you deal on enemies. The Guardian Cell fitted in the weapon's Defense slot works great as it allows you to share this shield to a nearby party member!

For Slayers who want to go all-out damage, Inferno's Burden is a must-have Hammer. It has 2 power slots, so you can max out power Cells instantly plus it also has Overpower, increasing your damage to staggered Behemoths.

The Thundering Maul is very effective weapon in hunts where Slayers are targeting Behemoth heads. It does 30% more damage to Behemoth heads, making it useful in breaking tough horns and Behemoth head parts.

Combo For Hitting Multiple Parts At Once

A combo that's great for closing a small bit of distance. The first two strikes of this combo allows you to confirm if your combo will connect since it's a poke. If the first strike misses, reposition and try again.

A basic combo that delivers heavy horizontal strikes, and a powerful Aetherslam to finish the combo. You can press Triangle in between strikes to load up ammo to the hammer to make each strike even more powerful.

A quick combo that can close in to Behemoth at range. Best used to initiate Behemoth encounters.

As a Hammer wielder, your role is to focus on breaking horns and head parts, and cause Behemoths to stagger. Perks such as Knockout King will greatly benefit this role.

Since you'll most like stagger Behemoths, dish out your hammer's entire combo string on knocked down Behemoths, and further amplify your damage with Overpower perk.

Practice & Master The Art of Booping

Your Concussive Salvo and Evasive Blast are great for booping Behemoths. However, this requires precise timing and can be risky since the blast requires very close range unlike the Axe & the War Pike's missile.

Anticipate Behemoth Attacks Before Every Strike

One of the major weaknesses of the hammer is that they strike slow, and takes a longer time to complete the attack animation. This leaves you vulnerable for an attack, so dodge in between strikes as needed.