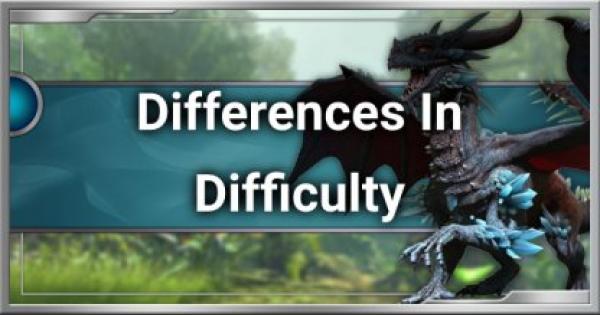 Check out this Dauntless guide to learn more about the differences between Behemoth difficulty! Learn more about what differentiates Normal, Dire, Heroic, & Heroic + Behemoths!

Check Out The Beginner's Tips & Guides!

There Are 4 Behemoth Difficulties In The Game

Dauntless pits you against various Behemoths which are classed by their difficulty. These difficulties are Normal, Dire, Heroic, and Heroic +.

Each difficulty will have a set of materials or drops that are specific to hunting that difficulty. There are materials which you can obtain from Dire variant Behemoths that cannot be acquired from hunting Normal variants.

Hunting Behemoths of higher difficulty will allow you to level up your Hunt Pass faster! You will be able to earn up to 30 progress points per break part when playing in Heroic + difficulty!

Check Out The Hunt Pass Here!

Normal Behemoths are the most basic variant of Behemoths in the game. They have the lowest health and power stats, and have a basic moveset. These Behemoths can be used by Slayers as practice to get the hang of new weapons & tactics.

Most Behemoths Have A Normal Variant

Most of the Behemoths will have a normal variant. Here you will be able to practice on them to get feel for how to deal with them. You can practice booping, try out different loadouts & learn the ropes with Normal Behemoths.

Elemental Patrols Are At Normal Difficulty

The Neutral & Elemental Patrols are all part of the Normal difficulty. You will be able to earn elemental specific orbs after completing these Patrols. These can be used to upgrade your Armors & Weapons to better versions of themselves.

Dire variant Behemoths possess new moves that deal more damage to Slayers. Slayers may need to rethink their positioning & attack strategies as strategies for Normal Behemoths will not work against the Dire variant.

Having A Good Build Is Important For Success

It is recommended that you equip a build that will suit the Behemoth that you will fight since Dire variant Behemoths are more deadly. Take into account the required power level & Behemoth Type when equipping your loadout!

Dire specific loot drops such as more Behemoth parts, and the Dull Arcstones can be acquired from the Dire variant Behemoths. These drops can be used to craft or further improve your weapons and armor!

Exotic Reagents are rare crafting materials that you can use to craft Exotic Weapons & Armors. These start to drop at Dire variant difficulty, and above.

The Behemoths Valomyr & Riftstalker appear on this difficulty. These Behemoths do not have a normal variant.

The Heroic variant of Behemoths are very difficult to fight. Their attacks may have modifiers which can allow them to deal much more damage to careless Slayers.

The Heroic variant Behemoths will require you to equip a specific build to be successful in the fight. Make sure that your build is strong against the Behemoth type, and meets the required power level!

Heroic + Behemoths are the Behemoths that you face in the end-game. They share the same movesets as the Heroic variant, but hit much harder than Heroics variants.

Slayers Can Only Self-Revive Once

Make sure that you are fully equipped and that your gear and weapons are fully maxed-out before attempting to hunt Heroic + Behemoths. Slayers will only be able to self-revive once during the Hunt!

Completing the Heroic + difficulty Hunts will reward you with the Peerless Arcstone. These can be used to fully upgrade your weapons & armors to their max level.