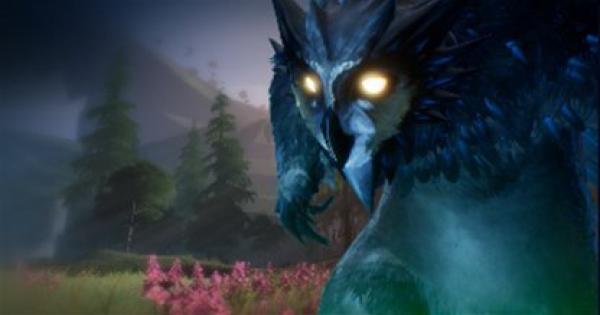 Check out this Dauntless guide on the weaknesses of the Behemoth - Boreus. Find out useful skills to counter its attacks and how to beat, interrupt, & boop the Behemoth!

Has A Mix Of Close & Long Range Attacks

The Shrike is able to swoop in on Slayers and deal tons of damage with its slam, and swipe attacks. However, Slayers should also be wary that it can also hurt you from afar with it projectiles & tornadoes!

The Moonreaver Shrike is a bigger version of the Shrike. It possesses the same moves and attacks as the Shrike. However, it also has follow up attacks such as a second slam, or occasionally hurling projectiles at you after certain attacks.

The Heroic Moonreaver Shrike receives a buff called Momentum that gives it a stacking damage buff every time it glides. This buff can be reduced by booping the Shrike.

Check Out How To Boop Here!

The Overpower Perk will allow you to do bonus damage to the Shrike when it is staggered. Since the Shrike can easily be booped during the fight, this is an essential Perk to have to finish the fight quickly!

This fight will have you dodging against several of the Shrike's attacks such as its ground slam, or projectiles. Having Evasive Fury equipped will increase your attack speed for a time, allowing you to get more hits in!

The Shrike will swipe four times at a Slayer close to it. These swipes are slow and can easily be evaded by moving back and away from the Shrike.

The Shrike will briefly charge an orb of blue energy, which it will then throw at a Slayer. This can easily be evaded by dodging to the side. The Shrike has an obvious telegraph for this attack making it easy to dodge.

When the Shrike is enraged, the blue projectile will turn red, and will have a follow up attack. You may have to dodge twice in order to avoid both the projectiles coming at you.

The Shrike will jump back and summon a tornado that slowly moves forward, damaging Slayers in its path. If you are far away, you can easily move out of the way to avoid this attack. If you are close, you may need to dodge.

Moonreaver Sends Out Tornadoes After Gliding

The Moonreaver Shrike will mix up its attack patterns during the fight. Occasionally, it will try to attack you with a tornado after it glides. Dodge to the side since you may be open to this attack if you are trying to boop it.

Moonreaver Uses The Tornado As A Feint

At times, the Moonreaver Shrike will send out a tornado, then glide through it. This leaves Slayers attempting to dodge through the tornado vulnerable to its glide attack. Therefore, it's recommended to evade tornadoes by dodging to the side.

The Shrike will jump up and slam itself on the ground. While it is up in the air, it will spread its wings and make its surface area huge. Be careful as the slam will cover a wide area around the Shrike.

The Moonreaver Shrike will jump then slam its body on the ground. Immediately after, it will jump again for a second. This attack will track random Slayers so you may need to dodge through this attack twice.

The Shrike will glide towards it target and attempt to damage the Slayer with its talons.

Boop The Shrike During This Attack

The Glide attack is your opportunity to boop the Shrike. Dealing a heavy attack to it will bring it down, and leave it vulnerable for you and your party to deal a high amount of damage.

On Heroic, Every Glide Increases Its Damage

Booping the Shrike is a lot more important in Heroic as it receives a buff called Momentum every time it glides. This adds a stacking damage buff, which can only be reduced when the Behemoth is interrupted.