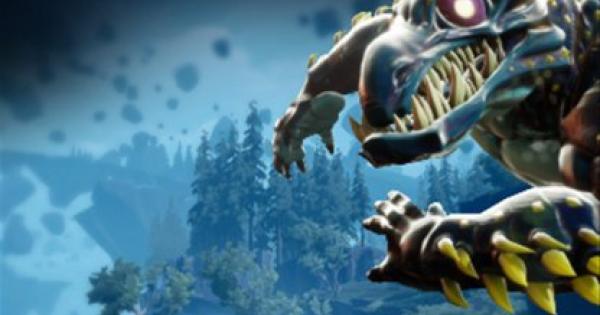 Check out this Dauntless guide on the weaknesses of the Behemoth - Nayzaga. Find out useful skills to counter its attacks and how to beat, interrupt, & boop the Behemoth!

The Nayzaga is known to shoot out the spikes on its body which impale themselves on the ground. These spikes can conduct electricity and will habitually shoot out orbs that shock and damage you.

When it has its quills fully grown on its back, whenever it does its sliding attack, it will be fully surrounded with lightning. Getting hit by this attack will cause "Shocked" status, disabling use of items and interactions.

The Shockjaw and Heroic Shockjaw Nayzaga's turrets will have a special turret that is made up of 4 needles instead of 2. They have a protective barrier around them, meaning that they can only be damaged once the barriers have been destroyed.

Before heading out to face the Nayzaga, make sure that you equip a Terra weapon to deal more damage, while at the same time have Shock armor to reduce the damage you take from shock attacks!

Protect Yourself From Getting Shocked

The Insulated Cell allows you to avoid getting the Shocked status effect while facing the Nayzaga. Since the Nayzaga uses a multitude of Shock attacks, this will definitely help you in avoiding the status effect.

Use The Deconstruction Cell To Destroy Turrets

The Deconstruction Cell is also very useful during the Nayzaga fight. Since it gives you bonus damage to objects created by Behemoths, it lets you quickly destroy the yellow pins so that you can focus on the Nayzaga more often!

The Nayzaga will start to slide forward, hitting and damaging any Slayers in its path. It is a fast attack that covers long distances, but can be avoided by dodging to the side.

The sliding attack of the Shockjaw variant has added shock effect and hits harder. Getting hit will inflict "Shocked" status.

The Nayzaga will start this attack by leaning to one of its sides. It will then use the momentum to jump and slam its side to the ground. It can be avoided by dodging backwards or to the side.

After lifting itself on its two front legs, the Nayzaga will try to hit you by slashing one of its arms at you. You can dodge this by evading to the side.

This attack is telegraphed by the Nayzaga's tail curling up right before it launches the attack. Since the telegraph is slow, it can easily be dodged.

The Nayzaga will quickly spin around, launching a shock attack that travels through the ground. Since this attack has travel time, you will need to time your dodges correctly to avoid getting hit.

The Nayzaga will launch its yellow spikes out of its body by two, impaling them on the ground as they land. These turrets will continue to charge up and launch electrical orbs at Slayers until they are destroyed.

Nayzaga's Body Can Block The Orbs

The Orbs that the turrets shoot out can be blocked by the Nayzaga's body. If you can get behind a Nayzaga, you can avoid getting hit by its turret's orbs.

The Shockjaw Nayzaga will spawn turrets made up of 4 needles instead of 2. They shoot out orbs in all directions, and have a barrier that hurts you if you try to hit it. Only one of these turrets spawn everytime the Nayzaga releases its spikes.

Destroy These By Hitting Orbs Back At Them

The only way to destroy these types of turrets is to hit the orbs that it shoots back at them. This will remove its protective barrier, allowing you to destroy the Turret. Destroying the turret with 4 needles will also stagger the Shockjaw Nayzaga.